Shilpa comes back home drunk with Ishika and she was not in her control at all. Ishika handles her and takes her to the bedroom and Shilpa was saying that I need wine also I want to dance. Ishika puts Shilpa on bed and she was about to leave but Shilpa grabbed her hand from behind. They both started touching and kissing each other also they took off each others clothes.

Nitin came to take water bottle from fridge and he hears loud noises coming from Shilpa’s bedroom. He went close to the bedroom door and gets shocked knowing that his mother is making love to her best friend Ishika on bed.

Next morning Shilpa tells Nitin to order food from outside in the evening because she is going out. Nitin asks here where are you going? To have fun with Ishika. Shilpa says you have become very ill mannered. Nitin warned Shilpa that if she did not stopped all this then he will leave her.

Ishika was taking a shower and Shilpa called her. She told her that Nitin saw everything last night and now he is very angry with me, I don’t want to lose him. Ishita told her that she forgot her purse at her house so tell Nitin to bring it to me at my house and then I will talk to him and he will understand. Shilpa says okay.

Shilpa says sorry to Nitin and says it will never happen again. She says Ishika forgot her purse here and tells him to take Ishika’s purse and got to her house to give it to her. Shilpa messaged him the address of Ishika.

Nitin went to Ishika home to give her the purse and she offered him a cup of coffee. Ishika went to make the coffee and Nitin gets happy seeing her hot photographs framed on the wall. She gave him the coffee and asked him what kind of adult videos you like? He responds sweet romantic. Ishika started seductively touching his legs with her feet and he asked what are you doing. She says nothing I just want to make a romantic story with you. Nitin leaves from there but while he was leaving Ishika took off his smart watch.

Nitin was getting at his home and he saw his wrist and gets shocked knowing that his smart watch was not on the wrist. He remembers that Ishika took off the watch.

Nitin went to Ishika’s house to take the smart watch back. He told Ishika that he left his watch at her house and she says come and get it but he says no you bring it. Ishika brought the watch and she started seducing him again. She says how I am looking? Nitin says very hot. Ishika says nobody said this to me ever, what have you seen in me and what are your eyes want from me? Nitin says you are my mom’s friend and this is wrong, this is not right and I am leaving. Nitin leaves from her house. 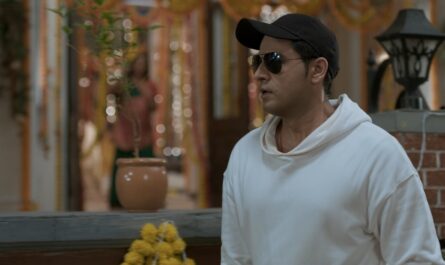