Season 1 of Netflix Original romantic crime based web series titled ‘Yeh Kaali Kaali Ankhein’ has been released this Friday on 14 January 2022 and after binge watching all the 8 episodes of this series fans are eagerly waiting for Season 2 announcement. This Tahir Raj Bhasin, Anchal Singh, and Shweta Tripathi starrer web series ended on a cliff hanger with the final episode titled The Crying Game. 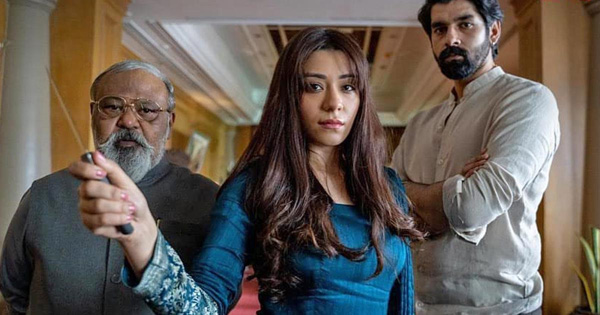 As we saw in the final episode of Yeh Kaali Kaali Ankein that Vikrant (Tahir Raj Bhasin) hired a killer to murder his wife Purva (Anchal Singh) but instead of killing her it was revealed that the killer kidnapped her after finding out that she is Akhiraj Awasthi’s daughter. The killer then blackmails Vikrant on phone that he needs Rs 100 crore or else he will bring back Purva to Akhiraj Awasthi.

So it is highly expected that the story of season 2 of Yeh Kaali Kaali Ankhein will revolve around this premise as how Vikrant will manage to arrange those 100 crore and whether the killer bring back Purva to the Akhiraj Awasthi house or not.

Also one more interesting aspect to the plot is that Purva’s brother Dharmesh (Surya Sharma) reached Shikha’s (Shweta Tripathi) wedding so it will be interesting to see whether Dharmesh will kill Shikha or what kind of chaos will he create at her wedding ceremony.

Tahir Raj Bhasin as Vikrant, Anchal Singh as Purva, and Shweta Tripathi as Shikha are highly expected to return in lead roles in Yeh Kaali Kaali Ankhein Season 2 as they are the most vital characters to the plot. Apart from these 3 we are also expecting Saurabh Shukla as Akhiraj Awasthi and Surya Sharma as Dharmesh to return in Season 2.

We are expecting Yeh Kaali Kaali Ankhein Season 2 to release on Netflix India by late 2022 or early 2023 but a lot will depends on the Covid19 restrictions as far as the filming is concerned.