Robert Stone offered Rhea Ripley to join his brand in the latest episode of NXT also Roderick Strong came face to face with Dexter Lumis in singles action. Kai and Gonzalez once again dominated Catanzaro and Carter. Santos Escobar had his first singles match since taking off his mask and Keith Lee defends his North American title in a triple threat main event match against Balor and Gargano.

Earlier tonight befre the show, Cameron Grimes is spotted feeling the scene as Damian Priest is laid out near his car. Grimes comes to the ring and says Priest slashed his own tires and attacked himself earlier today. Grimes wants the referee to ring the bell and crown him the winner. Priest appears on the stage with referees holding him back after which match begins. At the end of this match, Grimes drives Priest into the ring apron. Priest tries a Razor’s Edge on the apron. Priest’s legs buckle. Grimes hit the Cave In outside the ring. Grimes hits another Cave In pinning Priest for the win.

Jake Atlas fires up and hits a bodyslam into a standing moonsault pinning Santos Escobar but Escobar kicks out. Atlas lands a moonsault to the outside that takes out Mendoza and Wilde. Atlas lands an inverted DDT for a near fall. Atlas goes up top. Escobar crotches Atlas on the top rope. Escobar hits the Phantom Driver pinning Atlas for the win.

Kacy Catanzaro lands on Dakota Kai with a Thez press. Raquel Gonzalez attacks Catanzaro from behind. Kai and Gonzalez work over Catanzaro. Kayden Carter gets the hot tag and clears the ring. Wheelbarrow kick by Carter. Kai kicks out. Gonzalez powerbombs Catanzaro. Kai puts Catanzaro in a seated octopus hold tapping her out for the win.

Bronson Reed surprises Karrion Kross with an enziguri followed by German suplex by Reed. Kross pops back up to his feet and lets out a war cry. Reed splashes Kross in the corner. Northern lights suplex by Kross. Kross rolls through and hits a short-arm lariat. Doomsday Saito by Kross. Kross locks in the Kross Jacket after which Reed taps out immediately.

Rhea Ripley boots Aliyah in the face. Ripley puts Aliyahin the Prism Trap. Robert Stone throws his shoe at Ripley. Ripley chases Stone around the ring. Aliyah tries to attack Ripley from behind but Ripley kicks her in the chest. Ripley hits the Riptide picking up the win.

Bobby Fish has to stop Roderick Strong from running away again. Strong tries to psych himself up but eventually tries to leave again. Fish yells at Strong to get in there. Strong leaves the ring. Lumis starts to move in Strong’s direction. Strong turns around and runs right into the plexiglass barricade. Strong gets up and runs to the backstage area. Strong is counted out. After the match, Lumis sneak up behind Fish and locks him in the head and arm choke. Fish escapes and runs away.

Keith Lee falls ontop of Johnny Gargano after the Woo dropkick. Gargano almost pins Lee with his feet on the rope. Lee powerbombs Gargano onto Finn Bálor while Bálor is seated on the top rope. Lee hits the Big Bang Catastrophe on Gargano. As Lee was pinning Gargano, Bálor dives off the top for the Coup de Grâce. Lee moves out of the way. Bálor crushes Gargano. Lee picks up Bálor and hits the Big Bang Catastrophe picking up the win.

1. Earlier tonight, Robert Stone tells Rhea Ripley that she hurt his heart last week but he gets it. She is playing hard to get. Aliyah has officially signed with the Robert Stone Brand. Stone offers Ripley a golden ticket. Ripley picks up Stone and tosses him into a trash bin. Aliyah charges in and yells at Ripley for touching her manager. Aliyah says just because Ripley’s career is in the trash that doesn’t mean she can throw Stone in the trash too. Ripley tries to tell Aliyah that Stone isn’t worth it but Aliyah slaps Ripley. Ripley smiles. Ripley tells Aliyah that her golden ticket gets her a spot in Ripley’s ring.

2. Timothy Thatcher gives another lesson in submission wrestling by brutalizing his students.

3. During Undisputed Therapy, Cole, O’Reilly, and Fish finally get Roderick Strong to get in the trunk. Cole tells Strong now that he has conquered the trunk, he will be able to conquer Dexter Lumis in a match tonight. Strong looks… concerned.

4. Backstage, Malcolm Bivens says he is pissed off to the point of pisstivity. Bivens says they just wanted to see who won the tag team title match last week. Oney Lorcan and Danny Burch stuck their noses in business that isn’t theirs. If Bivens didn’t hold Indus Sher back, Lorcan and Burch would have ended up in an ambulance next to Maverick.

5. Backstage, Adam Cole says it doesn’t matter who wins the triple threat tonight. Cole is the greatest NXT Champion ever. It doesn’t matter who he faces. Cole’s only concern is making sure he has enough room on his mantle for the North American Championship.

6. Backstage, Robert Stone and Aliyah were talking to Regal via video chat. Stone demands a rematch against Ripley. Regal says they can have the match, but it will be Stone and Aliyah vs. Ripley. Stone tries to add that if Ripley loses she has to join the Robert Stone Brand. Regal says he’s not going to make her do that. Ripley walks in and says she is perfectly fine with that stipulation. 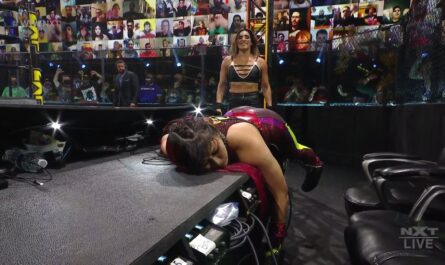 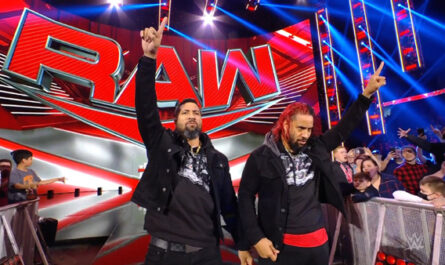