After the Undertaker announced his retirement, the entire SmackDown locker room showed him respect by chanting ‘Thank You Taker’ in starting of todays SmackDown also a womens fatal 4 way happened to find out the next challenger for Bayley at Extreme Rules 2020. New Day and Lucha House Party teamed up against Miz and Morrison, Cesaro and Nakamura. Strowman challenges Wyatt to a Swamp match which Wyatt answers by his laugh throughout the arena.

Alexa Bliss and Nikki Cross hugged each other after which Cross rolls up Bliss. Bliss kicks out. Bliss was shocked. Bliss and Cross lock up. Lacey Evans pulls Bliss out of the ring. Evans launches Bliss into the barricade. Dana Brooke lands a cartwheel splash on Cross. Evans breaks up the pin. Brooke lands a handspring elbow on Cross and Bliss. Evans lands a double bronco buster on Cross and Bliss. Brooke crushes Evans with a senton off the top. Cross breaks up the pin. Bliss attempts Twisted Bliss. Brooke gets her knees up. Evans tries another handspring but Evans levels here with a Women’s Right. Cross surprises Evans with a schoolboy picking up the win and becoming the no. 1 contender for SmackDown Women’s Title. After the match, Bliss and Cross celebrated.

John Morrison throws Kofi Kingston out of the ring. Shinsuke Nakamura sends Kingston into the plexiglass barricade. After the break, New Day battle Nakamura and Cesaro to the backstage area. Lince Dorado dives off the top and hurricanranas Morrison off the apron out to the floor. Gran Metalik walks the ropes and drops an elbow on the Miz for the win.

In the end of this match, Jeff Hardy fires up. King Corbin counters the Twist of Fate. Hardy runs right into deep-six. Hardy kicks out. After a distraction, Hardy hits a Swanton pinning Corbin for the win. After the match, Corbin attacks Hardy. Kingston makes the save. Hardy tells Strowman to come gets some. Strowman Power Slams Corbin. Riddle crushes Corbin with the Floating Bro. Hardy drops to one knee and does the Undertaker pose.

1. In the starting of the show, the entire SmackDown locker room was there in the arena chanting “thank you, Taker!” Undertaker Flashback shown: The Undertaker’s debuts at Survivor Series November 22, 1990. During a video package, John Cena, and Roman Reigns put over Taker. Cena calls Taker the bar for respect. Reigns says what Taker has accomplished with never be duplicated.

2. King Corbin comes to the ring and trash talks Undertaker. Corbin calls Taker the founding member of the “Kiss my Ass Club”. Corbin says Taker has been stealing money from this company for 20 years. Corbin says Taker sucks. Jeff Hardy attacks Corbin from behind.

3. Backstage, Jeff Hardy says Corbin struck a nerve. Taker has bee a mentor to Hardy. Everyone owes a debt to Taker, especially Corbin.

4. Bayley and Sasha Banks were out for commentary for the next match. The winner of the following fatal four-way will get a shot at the SmackDown Women’s title at Extreme Rules.

6. Braun Strowman comes to the ring and says that he witnesses a snake bite Wyatt over and over. All Wyatt did was laugh. Strowman says he realized Wyatt was the devil. Strowman started doing the bidding of the devil. Strowman wants to go back to the swamp with Wyatt. As old Wyatt family images cut into our feed, Wyatt’s laugh echos throughout the arena. Strowman laughs too. 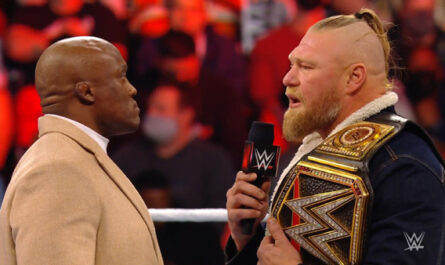 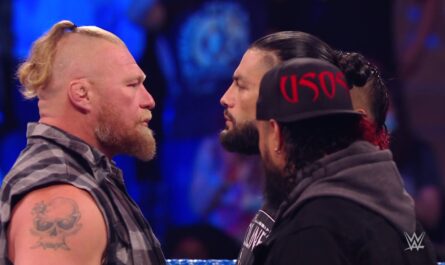