Jordynne Grace almost won the X-Division Championship today as she defeated Rohit Raju on the weekly episode of IMPACT Wrestling. Kylie Rae shows ‘Shade of Grey’ as she gave a vicious beating to Kimber Lee. Rosemary and Taya teamed up against Tasha and Kiera Hogan. Tommy Dreamer faces Brian Myers in a singles match. In the main event Motor City Machine Guns went against Ace Austin & Madman Fulton in a tag team match.

In the deciding moments of this match Tommy Dreamer jumps off the second turnbuckle with an elbow of his own but Brian Myers rolls free to hit his DDT followed by a pin attewmpt but he only gets a two count after which he gets frustrated. Myers rolls out of the ring but instead of contemplating, Myers grabs a kendo stick. Myers gets back in the ring but Tommy turns the tide and hits him with a White Russian Leg Sweep and went for the cover but only two count. Dreamer still holds the kendo stick as Brian begs him off as he tries to tell him to think of his daughters. This hesitates Dreamer, and Brian slaps him. Myers grabs the kendo, and begins assaulting Dreamer.

Post Match – Brian Myers continues his attack on Tommy Dreamer and it prompts security and Scott D’Amore to deescalate the situation. Officials attend to Dreamer.

Rohit Raju takes his good old time taking his belt off and it’s to play mind games with Grace. Rohit finally goes to set the belt aside and Willie Mack casually grabs hold of it. Rohit struggles with Mack and gets suplexed by Jordynne Grace an she rolls him up for the bridge and the 1-2-3 win.

Post Match – Rohit Raju explains what happened to the official. David Penzer announces that the X-Division Title was not on the line and still the champion is Rohit. Rohit says his “Defeat Rohit Challenge” was not for the title.

At the end of this match, Larry wrenches the neck of Dezmond. Larry’s power overwhelms Dezmond as he continues to fight free and sure enough, gets the tag. Wentz gets caught trying to deliver a codebreaker but changes his gameplan with a flurry of kicks and attacks before he trips him down for a running shooting star press. Two count, but Wentz turns it into a back sleeper. Larry fights to his feet and tries to shake Wentz off. The Rascalz double team with a kicking frenzy. Wentz talks trash to Acey who hoist him up by the throat. Acey comes in to knock Wentz silly, but he avoids and superkicks Acey out. Hot Fire Flame on Larry D for that 1-2-3 win.

At the end of this match, Tasha and Kiera try to double team on Taya but her strength shows through. aya with a Kaentai suplex before tagging in Rosemary. Another suplex by Rosemary but Steelz hits a codebreaker. Spear by Rosemary with a double underhook sit-out for the pin victory. Backstage Jessicka Havok and Nevaeh were watching this match

The Deaners challenge Steve to a beer chugging contest and Steve obliges with his monkey in the corner. Swinger has enough and tags himself in. The Deaners take control of Swinger, but it’s not long before Swinger corners Cody in his corner. As he begins his corner punches, he prompts Steve to find an object in his fanny pack and he pulls out a bevy of stuff that Swinger doesn’t need.

Deaner fights off Swinger, but Swinger headlocks him in the middle to wear him down. Swinger then rifles through his fanny pack but the ref tells him to get rid of it. Swinger does but grabs Steve’s monkey. Steve gets in and struggles to free his friend from Swinger’s clutches, but it provides enough of a window for Deaner to catch Swinger with a snap DDT for the win.

In the last moments of this match The North came and causes a distraction to the ref. Out come The Good Brothers. Gallows hits an uppercut on Fulton. Crossbody double team on Madman gets Motor City Machine Guns a pinfall victory.

1. Moose wearing floral shorts continues his search for the TNA Title but ends up empty.

2. John E. Bravo was backstage with his wedding party and confesses that he needs a little financial assistance for the ceremony. Best man Fallah Bahh offers to find a way to help pay.

3. The Deaners get into it with Johnny Swinger and Crazzy Steve.

4. Rohit Raju announces “Defeat Rohit Challenge?” for the X-Division Championship. Out comes Willie Mack once more. Rohit says that Mack already had his opportunity and now it’s gone. This challenge isn’t for him anymore. Rohit demands a new challenger. Who comes out but Jordynne Grace.

6. Fallah Bahh was in the locker room shower which Hernandez was basking in. Bahh finds his wad of cash wrapped in the t-shirt and walks off elated.

7. Jimmy Jacobs was with Dr. Foreman to talk about Rich Swann’s recovery. The doc says Swann is ready for Bound For Glory and is ready today. Rich comes over and says he’s feeling better than ever. In comes Eric Young dressed as an orderly and begins attacking Swann and screaming like a maniac. He obliterates Swann’s knee.

8. The Machine Guns were backstage with Gina but get interrupted by The Good Brothers. They say they’ve already been there and done that. Alex Shelley sarcastically asks if they have any tips for them. It doesn’t matter because they’re the champs, not Gallows and Anderson. The Brothers say they’re going to be their guardian angels tonight to ensure they face the two at Bound For Glory.

9. Josh Matthews recaps Deonna Purrazzo breaking the arm of Susie at Victory Road 2020. Gina was backstage with Kylie and she was not pleased with those actions. In come Kimber Lee to taunt Kylie. Lee says that Susie is who she shouldn’t be worried about, but she should be worried about her arm. Kimber Lee implies that “Su”sie is bad. This sets Kylie off and she attacks Kimber Lee. Rae gets astonished by her own actions.

10. Scott D’Amore was sitting across from Heath Slater. He admits that Heath is the right fit for IMPACT and he is grateful (and thankful) for the opportunity. D’Amore seems to be presenting Heath his contract but it’s Heath who has a proposal for him. It’s a hefty packet with a lot of legalese. A lot of zeros on there. D’Amore says Heath can’t be serious with this. Heath implores Scott to look at it again. D’Amore tells him to come here and earn it. Heath says he was never a Sunday morning jobber. When was the last time Heath jobbed on PPV? Things get heated and D’Amore tosses Heath’s proposal in the air.

11. Rhino anxiously awaits outside to hear the results. Heath Slater comes at him with a lot of anger and “thanks him” with disdain.

12. EC3 implores Moose to break his attachment and legacy to the TNA Title. He drops it over a bridge before he says “Free Moose.”

13. Ken Shamrock was despondent with his actions against Eddie Edwards last week and in comes Sami Callihan to inform him about the strong social media feedback it’s receiving. Ken doesn’t care about that stuff and Sami shoves Shamrock to get him amped. It works and Ken grabs hold of Callihan. A security guard walks into the picture and Ken beats him down mercilessly. 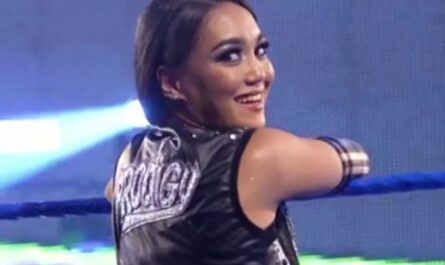