Vinita was cooking in the kitchen and her hand got burnt. Saurav was waiting for his breakfast outside in the living room and he scolds her for being careless. Vinita’s devar puts ice on her burns. Vinita gave Saurav his tiffin. Saurav tells her that he is going out for two days for work, so take care of yourself and then he left.

Vinita went out to buy vegetables. She went to a vegetable cart and the cart owner started telling her the prices of the vegetables. A handsome guy came on the bike to buy cabbage and Vinita started imagining about making out with him in the GYM. Vinita’s imagination ended and the guy went away after paying Rs 70 to the cart owner. 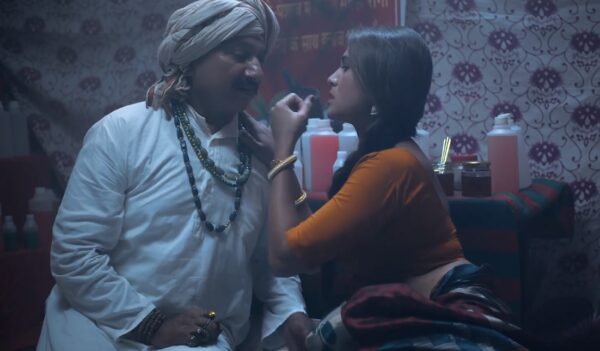 Vinita saw a Baba smiling at her and he hints at her to come to him. Vinita went to him and he tells her that I have read your mind and I know what you want. Vinita said, I don’t want anything from you and he tells her, Your mind is saying something else. Baba tells Vinita to come inside his tent and she obliged. He gave her a magical honey bottle and he tells her that you just need to lick one spoon of honey once and after that whoever you see, that person will fall in love with you.

Baba further tells Vinita that if you have any doubt then you can test it right now. He gave a spoon to her and Vinita licks one spoon of honey after which she makes out with Baba in the tent.

Vinita comes out of the washroom after taking a shower. She licks some honey after that she made a phone call to vegetable seller and tells her to deliver cucumber at her house and he says that I will come now. Viniita says I need this honey daily.

Vinita also made a phone call to clothes shop owner and she tells him that the lingerie you gave me is very tight and I am having problems in breathing. Shop owner asks her, What you want from me? Vinita says I want you to help me in taking off my lingerie. Shop owner says I will come now and will take off everything. Vinita says for the first time I am having a lot of fun as the people who doesn’t even look at me, are now following me like a dog.

Vinita wonders who should she call next and then she thinks about calling her regular customer. Vinita made a phone call to a person but his number was busy.