Harman recalls Soumya getting ready as Tarana and applying make up, wearing jewellery etc. Tarana walks towards them. Shakti song plays…Angel gets shocked as Tarana poses and claps like kinnar. Simran smiles. Tarana poses and stands like a kinnar, shocking Angel, Mahi and Daljeet.

Preeto asks Harman what was the need for Soumya to take this roop? Harman recalls Soumya getting ready as Tarana. A flashback is shown, Harman tells Tarana when he first saw her as Gurumaa, he got angry, but later he understood her and felt that his innocent Gulabo is actually strong and can fight with anyone, and can change anyone’s heart for betterment. He says now I don’t get angry, but feels proud of you. He says I know why you have taken up this avatar and tells that he is always with her, in her decision. Flashback ends.

Harman tells Preeto that just like iron can cut iron, a kinnar was needed to defeat another kinnar, Gulabo couldn’t do this work as Soumya, and that’s why she came as Tarana. Angel, Daljeet and Mahi continue to get scared of Tarana. Angel asks what is this drama? Why did you come here, and in what avatar?

Tarana walks towards her. Angel walks backwards. Tarana says why I came and in which avatar, your forehead sweat will reveal, Daljeet’s faded color will reveal and fear in Mahi’s eyes will reveal. She walks towards them while the trio moves backwards and get inside the house. Preeto, Harman and others come inside, followed by Tarana’s fellow kinnars. Angel moves back with Mahi and Daljeet.

Tarana says I didn’t want to come in this avatar, but you forced me. She says I had told you to pray that I shall not come in my real avatar else the land will be less for you to run. She says now I came in my real avatar, your reverse aarti is done, now starts the reverse countdown. Angel asks do you think I will get scared of your avatar? She says you have fooled Police officer, I will call police and get you jailed.

Tarana snatches phone from Angel’s hand and asks if she wants to call Police, tells that they can throw Soumya out of the house, but not kinnars’ Gurumaa Tarana. She twists her hand and pushes her. She says you have changed the meaning of kinnars, tells that they are special people of God, who distributes the happiness to the people, get happy with people’s happiness and bless them, when someone gets a child, then they go and take nek and bless them, says they go to someone’s marriage and bless the couple. She says people prosper with their blessings, but you have stained on kinnar’s name, which is difficult to wipe. She says I won’t let your reflection fall on my family and that’s why I am giving you last chance to leave from here with Daljeet.

Angel says I am not scared of your threats, I will call Police and get you and everyone arrested. Tarana snatches her phone and breaks it. Angel asks if you are mad to break my smart phone, which I bought today. Tarana slaps her hard and asks her to tell where is Heer? Angel asks how dare you? They have a fight. Mahi was about to call Police, but Preeto snatches her mobile and pushes her. Mahi falls down. Daljeet tries to run, but Harman runs behind him and catches him. Tarana asks Angel to tell where is Heer, else she will see her Rudra avatar. She asks Angel to say. Mata Rani is shown. Nammo Durge plays…

Parmeet and Sant Baksh were in their house. Police constable comes there and gives file to Sant baksh, says you asked me to get this file. Parmeet says he came to give this file to you so late in night. Sant Baksh tells that Virat is insisting to see the file and if he sees it then will understand that I made this case weak, that’s why I made this duplicate file and when he sees this file, he will think that the case was weak already. Parmeet says you did right. Virat hears them and gets shocked. He recalls Soumya’s words and thinks their doubt was right. 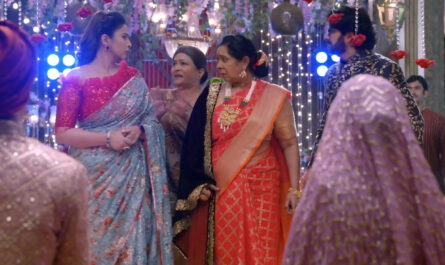 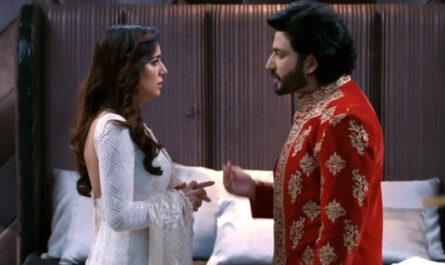