Chandan’s (Lakshya Handa) friends asks him to take out a chit out of a bowl. They say to him to find out whose story will get published in Madhosh Madan’s Zahreela Ishq next edition. Beena Madam name comes out. Zahreela Ishq, ‘A book for Youth with hot and sexy stories comes out.’ Its writer was Madhosh Madan.

Dinesh and his friends started reading a story from the Zahreela Ishq book, ‘Beena Madam’s blouse.’ College got closed but Beena Madam was still checking the projects of her students.’ Beena madam was shown working on a sewiing machine and her student ‘Dinesh’ came. Beena madam scolds him on making a bad blouse and she tells him that she will teach him how to do it properly. Beena madam takes a measuring tape in her hands and she wraps it around her breast. Beena madam tells Dinesh to hold it and her size was 38. Beena madam says its Everest.

The guys were enjoying reading the story and they tell their friend (Who was the student in the story) why didn’t he stopped and he says that even his father wouldn’t have stopped that time. Chandan came and the guys told him to read the story for them. Chandan says I don’t write them as its someone else. The guys says ok but read it.

Chandan started reading the story, Beena puts Chandan’s hand on her body and she started enjoying his feel. Chandan kissed Beena on neck and she screamed. One of the guy starts screaming and his friends says keep quiet.

Chandan continues reaadig the story. Beena and Dinesh started kissing each other on lips after which Dinesh started satisfying Beena from behind while Beena was holding the sewing machine. Doorbell rings and Beena went outside. There were flowers with a letter and on letter it was written that cheating in relationships is Gandi baat Sorry.

Dinesh tells Chandan that it was fun hearing you reading it. Dinesh says you write really good Madhosh Madan. Chandan again says I am not Madhosh Madan and leaves by giving the book. Dinesh friends complimented him on what he did with Beena Madam. Beena madam slapped Dinesh asking him why he did this and she showed him the book. Beena madam says that its better if you have made the video amd made it viral.

Chandan was shown writing something on a notebook and three guys came wearing masks and they kidnapped him. Chandan was taken in a van. The masked guys says that they brought him to find out whose story is next. The guys removed their masks and it was Tinka, Monty and Dinesh. Chandan again says that he is not the writer but the guys says you changed our approach. The guys once again brought the chit bowl and Chandan takes out the chit. Lalita Madam’s name came out. Another edition of Madhosh Madan’s Zahreela Ishq gets published.

Pappi came to a Paan shop and he buys the 2 copies of Madhosh Madan’s Zahreela Ishq book from there after which he went to meet his girlfriend Neeli. Neeli was student at a fashion college. Pappi gives Neeli a parcel and tells her to send it to Lalita madam. Neeli gives the parcel to Lalita madam and she opens it secretly in the washroom. In the parcel it was Love You Lalita edition 10 and Lalita gets shocked reading the story. Chandan was watching Lalita from outside and behind him his friend Monty was watching him.

Chandan reads the story in the book about Lalita Madam. Dinesh, Monty and Tinka were hearing him read. College gets closed and Lalita madam went into the trial room to try one of the dress she has designed and the very moment the fabric supplier Pappi came there.

Pappi came and Dinesh, Tinka and Monty told him to sit with them. Dinesh asks Pappi that his story with Lalita madam got published and Pappi says that I can’t think dirty about her.

Chadan continues reading, Pappi tells Lalita that you are looking very sexy. They both started talking in ancient language. Lalita tells Pappi to maintain one hand distance but Pappi says then how will we make love. Lalita takes off all her clothes and Pappi starts kissing all over her body after which Lalita gets on top of Pappi and she starts enjoying with him. Doorbell rings and there were red flowers with a letter. The letters says cheating in relations is Gandi Baat Sorry.

All four boys ‘Chandan, Tinka, Dinesh and Monty’ were thinking who is this Madhosh Madan and Chandan gave a weird smile. Neeli comes to her house and her mother was doing preperations for her marriage with Pappi. Neeli says that when she will go to college tomorrow she will get fall stitched on these sarees.

Chandan was writing something on a notebook in his hostel room and three masked people once again came. Chandan thought its Dinesh, Monty and Tinka again but this time around Chandan actually gets kidnapped as they made him unconscious by putting chloroform on his face.

Pappi sees Neeli reading that dirty book and Neeli says that I don’t want to marry you. Neeli gives the ring back to Pappi and leaves. Pappi says now I need to find out who is this Madhosh Madan. Dinesh, Tinka and Monty were thinking where did Chandan went.

Beena, Lalita and one more lady were behind Chadan’s kidnapping. They removed their masks and they try to kill him by strangling him. Pappi came there and saves Chandan. Pappi gives Chandan a offer that he needs to accept that he is Madhosh Madan and all the stories were lies with real names. Beena Madam says we will pass Chandan with good marks and Chandan accepts the offer.

Chandan accepts in front of the whole college campus that he is Madhosh Madan and all those stories were lies. Ranjit sir says that we should throw Chandan out of the college but Chandan apologized. Sulekha Madam says to Neeli to marry Pappi now. Pappi says that I don’t want to marry Neeli because she doesn’t trust her relation. Chandan gave a weird smile.

Sulekha Madam asked Chandan to come with clothes in her room and he came. Sulekha madam starts putting color on his body and he says if anyone sees then. Sulekha madam says that you are Madhosh Madan so no one will see and they both made steamy romance after that.

Neeli tells her mother that Chandan gets framed wrongly and now his story will get published. Neeli’s mother asks her to tell her what did she saw and Neel starts narrating the story. Neeli asks her mother that why she writes these real stories and her mother says that 20 years before she was also a student in the college and she fell in love with her Principal Madan at that time but later she finds out that he has a wife and he is cheating both of us and from the very day I started writing this book as everyone in the college is cheating someone and its wrong. Neeli asks her mother, Are you ready for next edition. 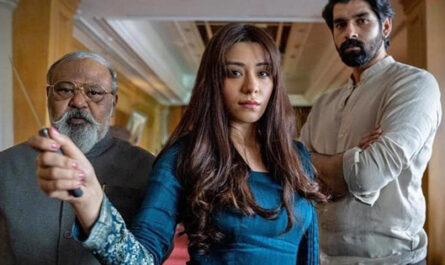