Zelina Vega and Asuka tear into each other as the match starts. Asuka rolls Vega into an armbar but Vega reach the rope. Vega kicks Asuka in her injured arm. Vega locks Asuka in a praying octopus hold and Asuka escapes to the outside. Vega leaps off the apron into a kick by Asuka as we head into the break.

Back from the break, Zelina Vega slaps Asuka in the face. Asuka responds with a pop-up knee. Asuka flattens Vega with a hip attack in the corner. German suplex by Asuka. Asuka follows that with a shining wizard. Vega puts Asuka in a double wrist lock but Asuka reverses it into a suplex. Both women were down.

Asuka almost locks Zelina Vega in the Asuka Lock but Vega hooks the ropes. Vega drops Asuka with a backstabber after which she went foer the pin but Asuka gets her leg on the bottom rope. Vega goes nuts and stomps Asuka. Vega goes up top for a moonsault but Asuka gets her knees up in time and immediately puts Vega in the Asuka Lock and Vega taps out. Asuka refuses to release the hold. Asuka eventually let the hold go.

As we return from break, Andrade comes down to the ring and starts berating Vega for losing to Asuka. Andrade calls Vega the weak link. Andrade says Garza is a weak link. He’s the greatest in WWE. Andrade wants a fight. Keith Lee answers.

Lana and Natalya takes an early advantage in the match working over Dana Brooke. Mandy Rose gets the hot tag and hits Lana with a flying knee strike picking up the win.

Kevin Owens dropkicks Aleister Black as soon as the bell rings. Owens and Black trade strikes. Owens works over black in the corner. Black fires back. Black chokes Owens on the top rope. Senton by Owens. Owens tosses Black to the outside. Owens dives off the apron and hits a senton as we head into the break.

Back from the break, Aleister Black was in full control. Black hits a nasty PK for a near fall. Kevin Owens counters Black’s pump kick with a superkick and he went for the cover but Black kicks out at two. Owens rains down right and lefts. Owens goes up top. Black cuts Owens off. Black sets up a superplex. Owens knocks Black off the top. Owens tries a swanton but Black gets his knees up. Pump knee strike by Black followed by a pin attempt but Owens kicks out. Black tries to pin Owens two more times. Owens won’t stay down. Black accidentally hits the referee after which the referee disqualifies Black.

After the end of this match, Kevin Owens hits Aleister Black with a Stunner.

Akira Tozawa and Drew Gulak double team on R-Truth. Gulak and Tozawa puts Truth in a double armbar. Gulak tosses Tozawa out of the ring. Gulak puts Truth in the Gulock. Tozawa tries his senton off the top but Truth moves out of the way. Tozawa crushes Gulak. Truth Attitude Adjustments Gulak on top of Tozawa picking up the win.

Dominik Mysterio decks Murphy. Murphy drops like a sack of bricks. Dominik hits the ropes and runs right into a pump knee strike. Murphy stomps Dominik. Dominik plants Murphy with a tornado DDT. Dominik stomps Murphy in the corner. Murphy rolls out of the ring. Dominik pulls a kendo stick from under the ring. Aalyah runs down to the ring and pleads with Dominik to stop. In the confusion, Murphy rolls Dominik up for the win.

After the match, Dominik Mysterio hits Murphy with the kendo stick. Aalyah steps between them. Dominik says he is doing this for the family. Aalyah yells that Murphy isn’t like Seth Rollins. Dominik calls Aalyah naive. Aalyah slaps Dominik Mysterio.

Before the start of this match, MVP calls Apollo Crews insane for trying to do the same thing over and over again. He further says that Cedric Alexander may have slipped up against Crews last week but they sent Alexander to Hurt Business Boot Camp to make sure that doesn’t happen again.

The Hurt Business and Crews and Co brawl around the arena. The lights flicker and the Retribution logo appears all over the arena. MVP, Lashley, and Benjamin hold the ring and wait for the impending attack as we head into the break.

Back from the break, The Hurt Business was working over Apollo Crews and Ricochet. Ricochet manages to tag in Mustafa Ali. Ali clears the ring. Ali hits a flying neck breaker on MVP. Bobby Lashley pulls Ali out of the ring. Crews catches Lashley with an Asai moonsault. Ricochet dives off the apron and hits a senton on Shelton Benjamin. Satellite DDT by Ali. Ali hits the 450 on MVP picking up the win.

Drew McIntyre kicks Robert Roode in the face as he tries a leapfrog. Roode rolls out of the ring. McIntyre hits a reverse Alabama Slam on the apron as we head into the break.

Back from the break, Robert Roode crotches Drew McIntyre on the top rope. McIntyre falls into the tree of woe. McIntyre sits up and suplexes Roode off the top. Ziggler tries to get involved. McIntyre pulls Ziggler back into the ring. Roode chop blocks McIntyre. Roode works over McIntyre’s leg. Roode knee breakers McIntyre on the announce desk.

Robert Roode sends Drew McIntyre back into the ring. Roode puts McIntyre in the figure-four. McIntyre rolls over to reverse the pressure. Roode gets to the ropes. McIntyre drops Roode with the Glasgow kiss. McIntyre tries to kip up but his knee gives out. Roode lands a spinebuster and he went for the pin but McIntyre kicks out.

Drew McIntyre hits the future shock DDT and he went for the cover but Robert Roode kicks out. Dolph Ziggler takes a big boot from McIntyre as he pushes Roode out of the way. Roode drops McIntyre with the Glorious DDT followed by a pin attempt but McIntyre kicks out. Roode calls for another DDT. McIntyre escapes and hits the Claymore picking up the win and retaining the WWE Championship.

1. The show starts and all the legends who have helped Drew McIntyre at Clash of Champions 2020 were present in the ring. HBK welcomes the virtual crowd after which he introduces WWE Champion Drew McIntyre. McIntyre joins all of the legends in the ring. McIntyre says being in the ring with all of them is really cool. McIntyre further says that he’s spent a lot of time with all the men in the ring. McIntyre thanks each man for all the help they have given him over the years. HBK says they all wanted to thank him for whipping Randy Orton’s ass. HBK says they wanted to even the odds and get a little revenge. If McIntyre is upset about them interfering, it was Ric Flair’s idea. Everyone had a good laugh. Orton appears on the ‘Tron and he says that this isn’t over until he says it’s over. Orton further says If McIntyre thought he went through hell last night, McIntyre has no idea what hell really is. McIntyre says Orton is going to beg for another title match. Orton says he will be given a title match just because he is Randy Orton. Orton wants to remind everyone in the ring that there is a price to pay when you cross the Legend Killer. Orton grabs his back and leaves the arena. McIntyre says he is going to put the title on the line tonight and issues an open challenge to anyone in the locker room he has not defended his title against yet.

3. Earlier today, a ninja delivers a letter to R-Truth. Truth reads the letter. It’s from Akira Tozawa. The ninja opens a briefcase and Tozawa’s blackbelt was in it. Truth says “oh Tozawa, why did you have to get devoured!” Tozawa sneaks out from under a table and schoolboys Truth to win the 24/7 Championship.

4. The ninja hits Akira Tozawa with the briefcase and pins him to win the 24/7 Championship. The ninja was revealed to be Drew Gulak. But that was not the end as R-Truth wins the title right back.

5. Backstage, Seth Rollins tells Murphy to go put on the suit he got him. When Murphy leaves to get dressed, Rollins pockets Murphy’s phone.

6. Jerry the King Lawler welcomes the Mysterio family to the King’s Court. Dominik Mysterio tells everyone that he is tired of all of this and next time he sees Seth Rollins, he is going to end him. King asks Aalyah how she is doing. Aalyah says she is still upset but she doesn’t want anything to do with Rollins or anyone who associates with him. Rollins appears on the ‘Tron and says someone isn’t being truthful. Rollins shows text messages between Aalyah and Murphy. Aalyah tells her father that Murphy isn’t like Rollins. Aalyah storms off. Rey Mysterio and his wife follows her.

7. Backstage, Murphy gets in Rollins’ face. Murphy snatches his phone back. Murphy grabs Rollins by the collar. Dominik charges in and attacked Murphy.

8. Lana and Natalya complained about Nia Jax and Shayna Baszler not being able to defend their titles against them tonight. Lana demands the women’s tag titles be given to them. Adam Pearce walks out and says Lana and Natalya have a match tonight against the newest members of the RAW Women’s division. Mandy Rose and Dana Brooke.

11. Backstage, Mustafa Ali walks out of the Hurt Business’ locker room. MVP, Bobby Lashley, and Shelton Benjamin were about to beat the breaks off of him when Apollo Crews and Ricochet step in. Crews challenges them to a match later tonight.

12. Backstage, Mandy Rose says that she and Dana Brooke will be watching whoever walks away with the Women’s tag titles.

13. Backstage, Dolph Ziggler tells Adam Pearce that the has someone in mind to face Drew McIntyre tonight. Pearce says as long as it’s not Ziggler he’ll listen to what Ziggler has to say.

16. Backstage, Randy Orton was dressed as a janitor. Orton puts on a pair of night-vision goggles. Orton bursts into the Legends Lounge with a chair. Orton cuts the lights off and you can hear the chaos. Orton cuts the lights back on and all of the legends were laid out. Orton sneaks away in his janitor disguise. 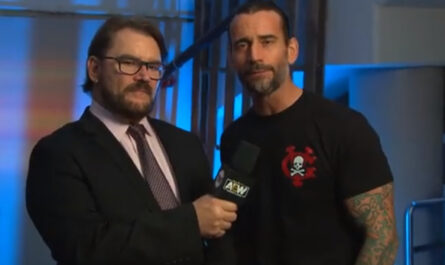 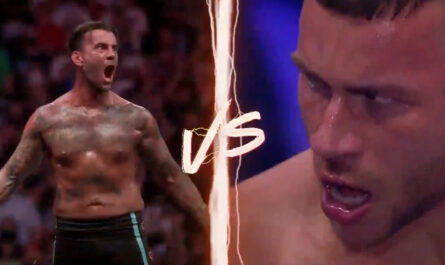 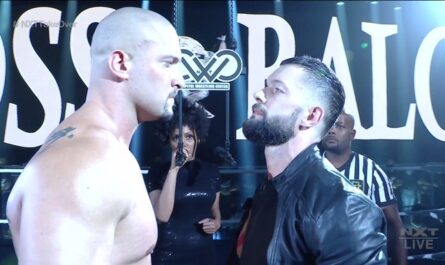