Prachi asks Ranbir why he did not left till now then Ranbir answers that it an adventure for him now and they can talk. Prachi tells him that it is a suicide for her and orders him to go. Ranbir says I came through the wrong way and says he will go out, ring the doorbell and come inside. Prachi asks why did he come here? Ranbir tells that he has two reasons to come here. He asks why Prachi that why was she upset when he was leaving and why were you staring at me. Prachi shows the jewellery and asks how did it come on your dressing table. Ranbir says I don’t know. She says it is mine and asks if he has stolen it. She asks if he likes to wear it. Ranbir says no and tells that you must have kept it intentionally. He says I care for you so much as I thought you as my friend. (Pehli dafa hai plays in the background) Ranbir says you think me as nothing, you have hurt me, I am leaving. Prachi was still standing. Ranbir says to Prachi that I will not return. Prachi asks him to go and says mad, drama queen. He will return before I count 20. She starts the countdown. Sanju and the goons see Ranbir coming out and cover their faces. Ranbir finds Sanju’s voice familiar and was about to go to him, but just then someone rings the horn and he goes. Sanju asks Rhea if her Buji sent someone to steal the money. Rhea says my Buji haven’t sent anyone and gets angry on you. Alia grabs the phone from Rhea and tells Sanju that she didn’t send anyone and asks him to do the work. Rhea asks he will not do our work. Alia asks her to wait for the good news. Sanju tells that he doesn’t like Rhea’s Buji. Ranbir leaves from there. Sanju wears the mask to steal.

Prachi waits for Ranbir and thinks he must have gone. Shahana asks her if Ranbir came? Prachi says he didn’t come. Shahana says you must have asked him to come by door. Prachi asks her to be quiet. Sanju comes inside Prachi’s house and asks the goons to off the fuse if someone comes. Prachi says if he returns then will get beaten. Shahana asks if Ranbir had come then also and smiles. Prachi asks him to be quiet. Sanju locks Pragya’s door and tells the goons that the family members are awake. Pragya says open my door. Prachi also tries to open the door. Shahana asks if Ranbir closed the door. Prachi says he will not do this. Sanju sits on the chair and asks the goons to search in the entire house, leaving the rooms. Pragya gets worried and calls Prachi. She tells that they have to go out to reach her home, as money is kept inside her room. Sarita behen thinks to see them. Rhea calls Sanju. Sanju thinks he is stealing, and she wants live telecast. Dimpy asks Rhea if this is right. Rhea asks her to shut up, let her talk to Sanju first. Sanju picks her call and tells that he is doing her work, there is no network and ends the call. Rhea says he is not letting me say.

Sarita behen sees the goons and thinks she can’t take chance to be lady singham. She throws the things on the goons and opens the door. Pragya, Shahana, Prachi and Sarita behen beat them. The goons run to Pragya’s room. Sarita behen asks why did you lock them inside, money is in the room. The goons open the almari and gets the money. They call Sanju and inform that money is stolen. Sanju asks them to come down the window. Rhea tells Alia if Sanju gets caught, then? He calls her and tells that the money is stolen. He is coming to give her money. Alia asks him to come tomorrow as Rhea’s Papa is at home. Sanju says ok. Rhea asks what is next? The goon tries to jump from the window. Sarita behen hits them with stick. They run back to room. Pragya and Prachi manage to open the door and get inside. They snatch bag from them and throw at each other. Sarita behen thinks to go inside and beat them.

Sarita behen throws the bag and it gets stuck to the fan. They tie the goons’ with the chair and ask Shahana to say when the Police will come. Sanju thinks to come there and get the money from the fan. Prachi calls Police. Sanju comes inside and keeps knife at Prachi’s neck. He scolds his men for getting beaten by the ladies. Pragya asks him to leave her daughter. Sanju says how can I do anything to her, she is my. 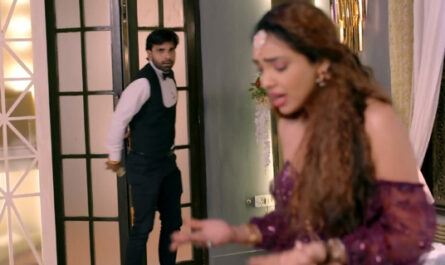 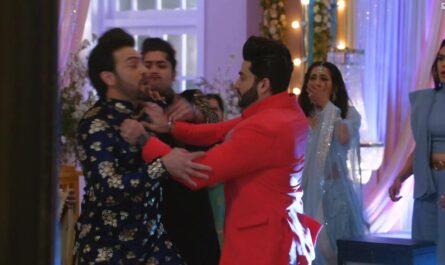