Rhea and Alia after seeing Sanju’s hired men got shocked and recalls their meeting with them. Ranbir tells that they are the thieves who had stolen money from Prachi’s house. Pallavi asks really? Shahana and Prachi were coming there. On the way Shahana asks Prachi that why did Mehra sir called you? Prachi says don’t know. She tells that she will resign and will not go against her mother. She says first we shall go and hear what he wants to say. Abhi asks Rhea to bring the rope to tie them. Rhea says she will bring. Alia goes behind her. Abhi asks to bring water and says first we will tie them and then will bring them in consciousness. Vikram asks shall we record their video to get proofs. Prachi and Shahana came inside. Prachi looks at Ranbir and gets emotional. Rhea tells that everything will be ruined now. Alia asks her not to get worried and tells that both of them are Sanju’s men. Rhea says we will be caught, they will take our names. Alia asks her not to get nervous and tells that she will not get Prachi come out of this problem. Rhea says ok and asks her to get rope. Abhi asks Prachi to see their faces. 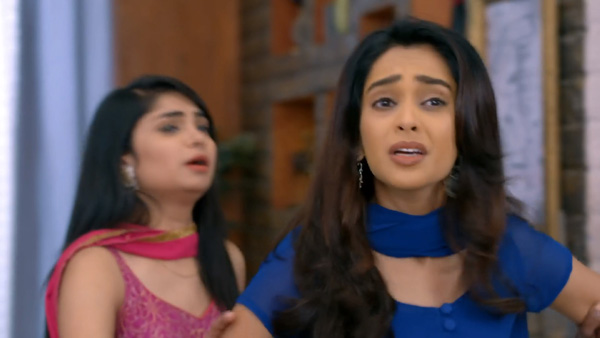 Prachi says they were making masks at that time, but I had seen their faces, they are the ones. Abhi says first we will make them confess and then will handover them to Police. Pallavi asks are you sure they were the ones. Ranbir says I saw them outside Prachi’s house, their boss is missing. He says he had their photo in his mobile. Vikram says I have seen their photo. Beeji asks them to get job in police department. Vikram says we have taken help of Private Investigator, give him some credit. Aryan ties the thieves with rope. They get consciousness.

Abhi jokes and then asks them to tell where is the money? He then asks on whose instructions, they had stolen the money. Ranbir says I know your boss will kill you and asks them to tell who is he? The goon says she was getting us do this for her loved one, we came to know later. Alia grabs the thief’s collar and threatens him, while Rhea distracts Abhi. Alia opens the rope. Pallavi calls Police. Rhea thinks make this thieves elope before Police comes here. Vikram asks why did you call Police now? Pallavi asks him to get them confessed before Police arrives.

Alia slaps the thief. The thief says you have done wrong. Rhea thinks why did you do this buji? Alia regrets slapping him and folds her hands secretly. The goon signs at Rhea and Alia and tells that she has hired us to steal the money and offered 20 percent commission. He says Prachi told us. Alia recalls telling them that she will give 2 lakhs to them. Ranbir asks the thieves not to lie and says who asked you. Rhea says enough Ranbir. Prachi cries. Ranbir asks her not to cry and says I know they are lying. Rhea says enough Ranbir.

Sarita behen comes home and calls Prachi. She finds the note left by Prachi and informs Pragya that she had gone to Mr. Mehra’s house with Shahana, left a note.

Rhea says Prachi is a thief. Ranbir says they are lying. Rhea says if they had taken another one name and tells that he doesn’t want to hear the truth. Abhi says you are trusting them. Rhea says dad please, this thief is lying. Rhea says Prachi like girl breaks trust. Alia says Prachi is a thief and asks Abhi to trust her now. She asks why you are not believing the thief, she planned the theft. Rhea asks if she wanted to get all the money. Prachi tells that she didn’t steal the money and tells Ranbir that if she gets arrested then her mother can’t bear it. She asks Abhi not to believe them and tells that she came here to resign from her job. Alia says you are fired, I am kicking you out of the job.

Sanju calls the thieves and thinks where are they? He thinks to go to their place and take their class. Inspector asks Rhea if Prachi is related to her. Rhea says she is just our employee. Ranbir asks her to be quiet. Abhi asks Rhea to let Ranbir say. Ranbir says I will answer you. Meera asks Pallavi to stop Ranbir. Pallavi asks Ranbir to let Inspector do his work and asks him to go to his room. Abhi tells that Prachi is not a bad girl. Alia tells that Prachi has confessed, we have a video recording. She asks Aryan to give his mobile. She takes mobile from his hand and asks Police to show.

Abhi says this was not needed. Inspector tells that Prachi has to come with us, as she asked the thieves to steal. Vikram says this is our family matter, we will solve it. Alia says this is not a family matter and asks him to arrest her. Ranbir holds Prachi’s hand and says she will not go anywhere. Pallavi asks him to let her go. Lady constable drags Prachi. Ranbir falls down. Prachi tries to hold his hand, but Rhea comes between them and gives her hand to him. Ranbir gets up holding her hand.

Rhea asks Inspector to take Prachi from there. Prachi cries and calls Ranbir. Abhi asks if joke is happening here and tells that he won’t let Prachi stay in jail for longer time. He promises Prachi that whenever you was in problem, I always stand infront of you, says that even this time too. Prachi hugs him. Abhi says I promise that I will bring you back in this house. Inspector asks Abhi to talk to his sister and says if she agrees then we can leave your daughter. Alia says Prachi is not Bhai’s daughter. Abhi and Prachi look at each other emotionally.

Sanju comes to the thieves’ godown and thinks where did they go? He thinks something is wrong. Alia asks Inspector to take her from there and says Rhea is bhai’s daughter. Abhi tells that Prachi is not his daughter, but she is more than his daughter. Inspector takes Prachi from there. Pallavi stops Ranbir and gives him promise asking him to go to room. Ranbir goes to his room. Pallavi tells Vikram that Prachi shall not be seen in office anymore. 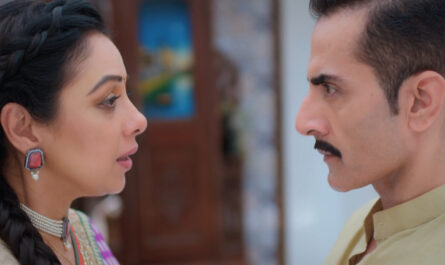