Karrion Kross relinquishes the NXT Championship due to a shoulder injury on today’s NXT episode. Tommaso Ciampa makes a return but as a heel. Breezango became the new tag champions. Mia Yim and Shotzi Blackheart had a singles match against each other. William Regal announces a 4 way 60 min Iron Man match for next week to crown the new NXT Champion. Santos Escobar defends his Cruiserweight title against Isaiah ‘Swerve’ Scott. Killian Dain turns heel also Ripley and Shirai teamed up in the main event agaainst Kai and Gonzalez. 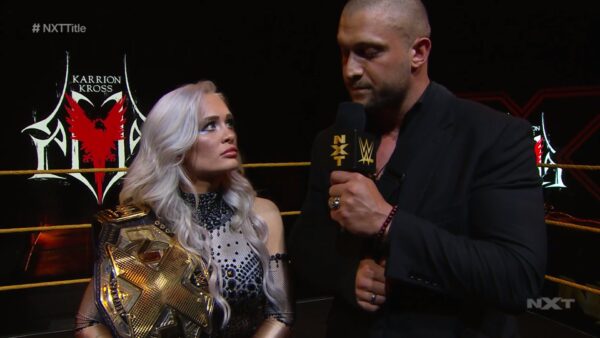 Just before ref rings the bell, Breezango starts attacking the IMPERIUM. At the end of this match, Tyler Breeze hits both Fabian Aichner and Marcel Barthel with superkicks after which Breeze tagged in Fandango and Fandango hits a double leg drop on both Aichner and Barthel. Fandango pins Aichner for the win.

This was basically a squash match as Ciampa starts dominating Atlas right off the start. Ciampa hits Atlas with a Willows Bell DDT picking up the win. After the match, Tommaso Ciampa gave a vicious beating to Atlas. Even when officials put Atlas on a stretcher, Ciampa again attacks Atlas and there was a sadistic smile on his face.

After Mia Yim’s entrance, Robert Stone came on ramp with Aliyah. Stone says that there is no way that Mercedes Martinez is facing you tonight after what happened with her during her confrontation again Rheaa Ripley last week. Shotzi Blackheart came from behind and runs her little tank over Stone. At the end of this match Blackheart hits a Swanton off the top rope on Yim picking up the win.

Before the beginning of this match Santos Escobar sends Raul Mendoza and Joaquin Wilde to the back as he decides to battle on his own tonight. In the end Escobar rolls out of the ring and he finds a Luchador mask lying around on the floor. Escobar wears the mask and headebutt’s Scott. Escobar pins Scott for the win.

Bobby Fish and Roderick Strong were accompanying Reilly outside the ring for this match. Kyle O’Reilly puts Maverick in a leg lock and Maverick taps out. After the match, Undisputed Era started giving a beatdown to Maverick but Killian Dain came to the rescue. After UE ran off the ring Dain hits Maverick with a punch confirming a heel turn.

Rhea Ripley at the start of this match tells Io Shirai to get out as she wants to start off the match. Ripley dominated Dakota Kai and tells her to tag in Raquel Gonzalez. Kai tagged in Gonzalez and then there was the much awaited face off of both the Amazonians. Ripley head butt’s Gonzalez and Gonzalez pushes Ripley after which Shirai got tagged in by chance. Shirai faces Gonzalez and Ripley says are you serious.

At the end of this match Mercedes Martinez pulls Rhea Ripley off the apron and Raquel Gonzalez plants Io Shirai in the center of the ring and went for the pin but Shirai kicks out. Shirai manages to tag in Ripley but she gets hit with a big boot from Gonzalez after which Gonzalez hits her finisher on Ripley picking up the win.

1. The show starts off with new NXT Champion Karrion Kross entering the ring alongside Lady Scarlett. Kross says I haave told you that I will win the NXT Title and I have warned you that as long as I am here everyone will suffer. Kross says I sufferred a shoulder injury at TakeOver 30 and I know as long as I have that injury they will not let me defend this title. Karrion Kross vacates the NXT Championship.

3. Backstage Timothy Thatcher tells Damian Priest that Thatcher should be the one to get a shot at the NXT North American Championship first as Priest will find out against him that how ill equipped Priest is when it comes to wrestling. Priest taps on his title on his waist and drinks the wine saying as far as I think I am very well equipped.

4. Backstage, Bronsaon Reed says that he has beaten Damian Priest so he deserves a shot at NXT North American Championship more then Timothy Thatcher. Austin Theory came from behind and he makes fun of Reed. Reed slapped Austin Theory hard.

5. Dakota Kai during a backstage interview says that tonight’s tag team match is a piece of cake for them as Kai and Gonzalez are a team while Ripley and Io not. Kai further says Rhea wants the NXT Women’s Title and Io knows it. Raquel Gonzalez says Rhea you messed up again getting on my faace.

6. William Regal came to the ring and makes an announcement that next week at NXT Special edition Super Tuesday, Johnny Gargano, Tommaso Ciampa, Finn Balor and Adam Cole will compete in a 4 Way 60 minute Iron Man Match for the NXT Championship.

7. Backstage Johnny Gargano says I have the Iron Man of NXT for years and next tuesday I will prove it by winning the NXT Championship.

8. Backstage, during an interview Rhea Ripley says that I didn’t came at NXT TakeOver to save Io but I came to give a message to Dakota and Raquel that Io is mine 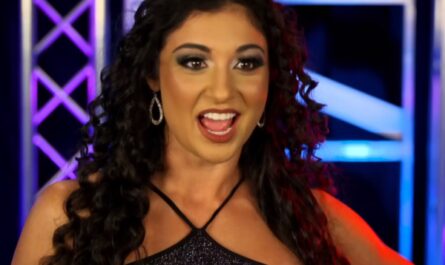 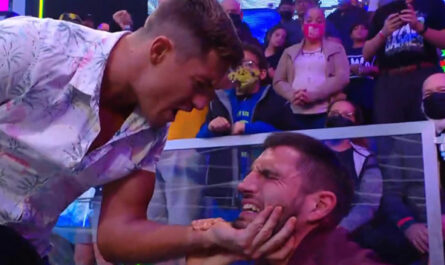