The Women’s Tag Titles got defended tonight on NXT by Sasha Banks and Bayley against Tegan Nox and Shotzi Blackheart also William Regal announces a major NXT North American Title Triple Threat match for next week. Impum defended their NXT Tag Titles against Breezango in the opening match and Bronson Reed calls out NXT’s newest monster Karrion Kross for a match next week.

Just at the start of this match, Imperium takes an early advantage after sending Fandango to the outside thanks to a distraction by the Indus Sher, Fandango rolls up Barthel but Barthel wasn’t the legal man. Aichner lands a DDT picking up the win and retaining the title.

Killian Dain works on Damian Priest’s injured back. Preist fires up and lands a few strikes followed up by a Flying elbow to Dain. Dain kicks out. Priest runs into the divide by Dain. Priest escapes Dain’s finisher to hit the Reckongning and pinning him up for the win.

As Aliyah was about to make her entrance, she sees Robert Stone lying on the ground with a brown paper bag with booze in it. Aliyah drags Stone down to ringside to watch the match. During this match, Robert Stone gets on the apron and flops around like a drunkard. Stone throws up all over the ring. Aliyah rolls up Xi Li for the win.

Kayden Carter fires up and lands a few strikes followed by a victory roll head kick by Carter. Dakota Kai kicks out. After this Kayden Carter hits a Rope hang Pedigree on Kai. Raquel Gonzalez made a distraction on the outside, Kai puts Carter in a modified octopus stretch for the win.

It was a squash match, Bronson Reed runs over Leon Ruff. Senton by Reed. Reed hits a top rope splash picking up the win. After the end of this match, Reed calls out Karrion Kross for a match next week.

Shotzi Blackheart lands a missile dropkick on Sasha Banks after which she went to pin her but Banks reverses Blackheart’s pin into the Banks Statement. Blackheart reverses that into Cattle Mutilation. Bayley tries to bring a chair into the ring. Tegan Nox cuts her off. While the referee is distracted, Bayley flips Blackheart back into the Banks Statement. Blackheart taps out. After the end of this match, Banks and Bayley were talking trash. Io Shirai runs down to the ring and attacks Bayley and Banks. Banks and Bayley ran away.

1. Backstage, Dexter Lumis hands Velveteen Dream a picture of them with the NXT tag titles. In response Dream says this was a favor for a favor. Dream is a solo act.

2. Timothy Thatcher gives us all a lesson in submission wrestling.

3. Earlier today, Adam Cole and Bobby Fish tells Roderick Strong that they have someone he can talk to try to help Strong get back to who he used to be. The doctor is revealed to be Kyle O’Reilly. Strong complains to Dr. O’Reilly that he can’t stop thinking about Lumis staring at him. Strong hates being stared at. O’Reilly says Strong needs to face his fears. Strong needs to face the trunk. Strong is traumatized by being stuffed in a car trunk by Lumis. Cole and Fish try to get Strong to get in a car trunk. Strong runs away.

4. Backstage. Adam Cole says he isn’t scared of Karrion Kross as he stares at the hourglass Scarlett left in the ring last week. Keith Lee walks in and tells Cole that Kross and Scarlett are correct, Cole’s time with the NXT Championship is limited but it’s Lee who will be taking it from him. Lee smashes the hourglass. Cole smiles and walks away. Lee says “tick, tock”.

5. Adam Cole came to the ring and says it’s mind-boggling that everyone thinks they can throw their hat in the ring for a shot at the NXT Championship. Karrion Kross has only been here for five minutes. Keith Lee says he wants the NXT title well, Cole wants the North American Championship. Maybe Cole wants to be the champ-champ, bay-bay! Keith Lee interrupts. Before Lee can speak, Johnny Gargano walks out on the stage. Gargano says he pinned Lee last week. Gargano is coming after that North American Championship. Gargano wonders why he should stop there. Gargano wants the NXT Champion as well. Lee asks how Candice LeRae is doing. Lee says he was more concerned with LeRae’s well being than Gargano was. Lee says LeRae whispered in his ear, “thank you Mr. Limitless, this is the most action she has gotten in years. Bálor tells Gargano that he doesn’t wait in lines, he steps in front of them. When Bálor is done with Lee, he is coming for Cole. NXT General Manager Willam Regal appears on the ‘Tron and announces that Next week Lee will defend the North American title against Bálor and Gargano. The winner of the match will go on to face Cole for a winner take all match.

6. Backstage, Damian Priest finds his car with all the tires flattened. Cameron Grimes pulls up and offers to get Priest an Uber.

7. Santos Escobar came to the ring with his faction and says El Hijo del Fantasma is the greatest luchador ever. Santos knew when he came to NXT, Fantasma was destined to end. Santos promises to make Raul Mendoza and Joaquin Wilde leaders. Drake Maverick comes to the ring and attacks Escobar. Eventually, the numbers game becomes too much for Maverick and he eventually gets beaten down by all three men. Escobar hits Maverick in the back with a monitor. Escobar hits a Phantom Driver off a platform through a table. 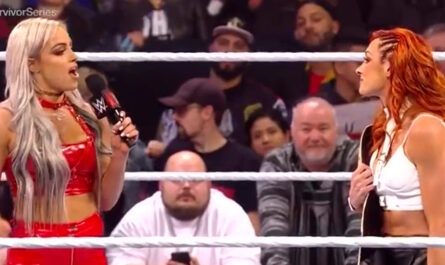