Abhinav gets a message from a girl named Shweta and she asks him what are you doing, Abhinav replied that I am waiting for your message, Shweta sends him her mobile number and she tells him to call her whenever he wants. Abhinav makes a phone call to Shweta.

A contractor named Chandrakant was drinking at home and he received a phone call from his cop friend Hary. Chandrakant tells him to not to call at this time and Hary says that I received you missed call, Chandrakant says that I called you for some work but its done now and he hangs up the phone.

Chandrakant makes a video call to a girl name Divya and she tells him that she wants to give him a surprise by doing an experiment in front of him. Chandrakant tells her to show him the surprise and Divya takes a small mobile phone and she puts it on vibration mode after which she started pleasuring herself with the vibration mode on. Divya started making seductive noise and Chandrakant gets happy seeing her but his mobile battery gets low and he disconnects the video call.

Next morning Abhinav asks Shweta on phone what does she like and she said that she likes shopping clothes. Abhinav says that I will do shopping with you to which Shweta responds that youu will get bored. Abhinav says I will buy you a one piece and Shweta sends him a picture of hers in one piece. Shweta asks him what else does he likes and Abhinav says black inner wears. Shweta says I understand what you mean and Abhinav requests her for a video call. Shweta says that I will think about it but for now I have some work. Shweta disconnects the call.

Divya did a sexy dance in front of Chandrakant on a video call and during the dance she takes off her top but then she covers the camera and Chandrakant gets disappointed.

Abhinav asks Shweta on phone what are you wearing right now and she says jump suit. Abhinav asks her for her topless pic. Shweta says I am wearing a black color floral print dress and then she asks him to guess the color of her inner wear. Abhinav says pink and then she says I won’t tell you. Shweta disconnects the call saying bye.

Divya again did dance on video call in front of Chandrakant while on the other hand Abhinav was talking to Shweta on phone but his dad came back from work. Abhinav’s father tell him to concentrate on studies in the same way he was concentrating on phone. Abhinav lied to him saying that he was discussing about the notes.

Abhinav was busy on chatting with Shweta on his phone while having breakfast with his father. Abhinav’s father tells him to eat his breakfast and Abhinav misbehaves with his father after which he leaves the table without eating the breakfast. 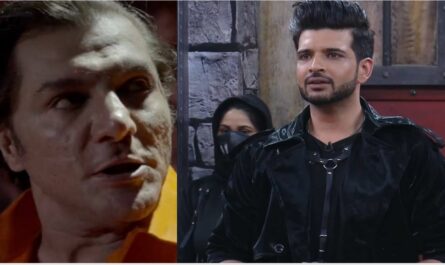