Tonight’s episode of Monday Night RAW started off with the Quiz Bwl Challenge, Chad Gable gets the first answer correct after which Riddle chooses the Biology topic and gets the answer correct, The next topic selected by Orton was Cartoons and Riddle gets the answer right. Gable got annoyed knowing that Cartoons is a topic. Orton provokes Gable into letting Otis answer a question. Otis selects Geography and gets his answer right. Riddle selects pop culture and Randy had no idea what the answer is and eventually his answer was wrong.

Chad Gable manages to steal a point. It’s point game for the Alpha Academy. Gable gets his answer wrong after telling Otis to keep quiet and Otis had the correct answer. Riddle steals the point. Orton selects sports and asks the crowd for help on a question about the Denver Broncos (they were in Colorado). Orton gets the answer correct. The final question was “how many grams in an ounce” Orton stops Riddle from answering. Riddle asks Orton how he knows the answer. Orton says Riddle isn’t the only person here who bakes. Orton answers correctly. RK-Bro wins.

Riddle and Orton wins the Quiz bowl as well as the Alpha Academy Challenge, they are now the number one contenders for the RAW Tag Team Championships. Gable goes nuts about how loud the buzzer was. Someone in the truck keeps buzzing the buzzer and Gable has a conniption fit in the ring. As RK-Bro leaves, The Street Profits walk to the ring and they started mocking Gable and Otis for losing and having to face RK-Bro. Gable challenges Ford and Dawkins to a match right now. The Street Profits accept because, and this will shock you, they want the smoke. Otis steamrolls Montez Ford from behind before the Street Profits get in the ring.

MVP and Bobby Lashley enters the ring and MVP gives Bobby Lashley a Paul Heyman-like intro. Lashley was given a hero’s welcome since this was his hometown. MVP puts over Lashley for defeating Brock Lesnar for slaying the Beast and taking back his WWE Championship. MVP says some are claiming that Lashley only won because of Roman Reigns. It doesn’t matter, Lashley didn’t see any interference and if the roles were reversed, Lesnar would do the same. MVP says Lesnar earned his shot at Reigns by winning the Royal Rumble.

MIZ TV Segment – The Miz was in the ring with his wife Maryse. Miz’s welcomes the special guests for tonight ‘the Mysterios.’ Rey and Dominik join Miz and Maryse in the ring. Miz says he noticed some tension and wants to clear the air. Miz plays the clip of him cheating to win against Dominik last week. Mysterio calls Miz a cheater. Edge and Beth Phoenix cheated at the Royal Rumble. Miz calls everyone hypocrites for cheering Rey, Eddie Guerrero, and others’ cheat. Miz complains that he’s being cheated because Rey is the Elimination Chamber and he isn’t. Rey and Dominik laugh.

Miz goes on a rant about Rey being on the cover of WWE2K 22. Miz just wants a little respect. The crowd drowns him out with boos. Dominik gets in Miz’s face and demands him to show his father some respect. Miz challenges Dominik to a rematch tonight. Dominik agrees. Miz says he never realized how much taller than his father Dominik is. Miz asks Dominik if he’s sure Eddie Guerrero isn’t his dad. Dominik pushes Miz.

Lita enters the ring and says that she felt like she was home at the Royal Rumble. Lita says she has wanted this match with Becky Lynch for a long time. Lynch inturrupts. Lynch notes that Lita was her idol when she was a kid and when she arrived in WWE, Lita was a great mentor. If there wasn’t a Lita there would be no Becky Lynch. Now that there is a Becky Lynch there can not be a Lita. Lynch goes on a rant about how hurtful it is for her idol to want to take everything from her. Lynch is going to end Lita once and for all. Lita says she knows she’s the underdog but the fans will drive her to victory at the Chamber. Lynch attacks Lita and leaves her laying in the ring. Lynch comes back and tries a Manhandle Slam. Lita fights out of it and hits a Twist of Fate. Lita flattens Lynch with a Moonsault.

Backstage, Kevin Owens walks into Sonya Deville and Adam Pearce’s office. Deville was wearing an arm sling due to the beatdown she suffered on SmackDown from Ronda Rousey. Owens asks if they saw what he did to Theory. Now that he’s beaten Theory, they have to add him to the Chamber match. Pearce and Deville says no. Deville tells Owens he may not even have a WrestleMania match. Owens goes off on a rant about how they can’t deprive Texas of his presence at WrestleMania. He loves Texas almost as much as they love him. Owens asks Deville and Pearce to think about it.

As the match between Riddle and Seth Rollins vs underway, Kevin Owens hops the barricade and attacked Riddle from behind, this cause a disqualification and Riddle won the match.

Randy Orton walks down to the ring and he hits Kevin Owens with a RKO. Rollins and Orton gets into each other’s faces.

After losing the tag team match in the main event, Randy Orton hits Kevin Owens with a RKO.

3. Dominik Mysterio (with Rey Mysterio) vs. The Miz (with Maryse) – Singles Match 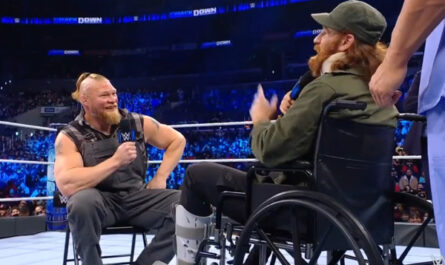