Rishabh, along with Karan and Sameer went to Kritika’s room to convince her not to marry Prithvi. Kritika says that she will kill herself if they tried to stop her marriage and hearing this Rishabh gets shocked. Prithvi along with Sherlyn was hearing this whole conversation from outside the room peeking inside. Rishabh says to Kritika that Prithvi is not as good person then Kritika says to just give her one reason why he is bad. Kritika says that Prithvi saved her life and today she is sitting in front of them just because of him. 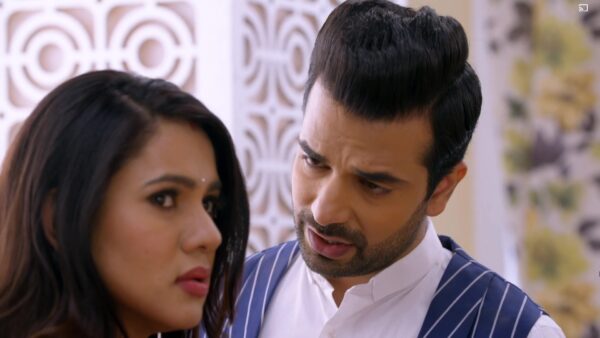 Prithvi gets very happy hearing all what Kritika said about him as she was portraying him like a hero. He tells Sherlyn that it was his plan all along as he hired goons giving them Rs 3 lacs and then he married Kritika. Sherlyn gets shocked knowing that Prithvi married Kritika intentionally. In Kritika’s room, Rishabh failed to convince her and decides to support her in her decision.

Sarla takes promise from Preeta that she will not try to break this marriage as otherwise Preeta’s relations with Luthras get worse and Preeta promised her. Srishti and Preeta were having a conversation and Prithvi came to them offering them a flower but they rejected. Prithvi asks Srishti that does she have a soft corner for him? Srishti says you look Yuck. Prithvi offered the same flower to Kareena and she accepted. Kareena scolds both Preeta and Srishti as the decorations were not done yet and Srishti says do it yourself then hearing which Kareena shouted on Srishti.