Preeta says that what does this guy thinks about himself, just because I am concerned about him that he will get bitten by mosquitos, he thinks that I want to see his body. Preeta says now I am not even feeling cold so I will sleep comfortably on bed. Karan thinks that this girl is attitude showroom as she thinks she will lock me out. He thinks its my room and I will go inside whenever I want. The weather gets bad and it started lightning also rain starts falling. Preeta gets concerned about Karan as he was getting wet outside. Preeta says he is very arrogant as he can’t request to open the door and let him in. Karan thinks that even rain started falling but Preeta is still not showing any concern for me as she is not getting up. 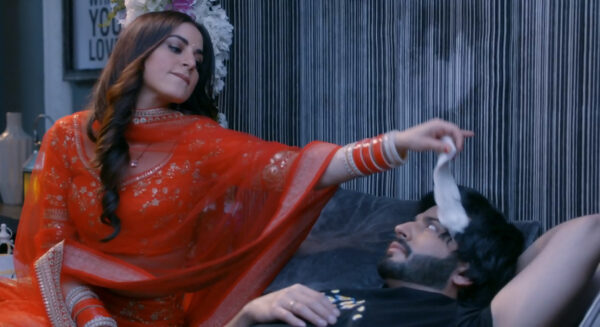 Preeta sees the rain getting heavy goes to the window because of concern for Karan but seeing how angry Karan was she stops thinking that as she would not let him say that she came by herself to open the window as she wants to come closer to him. Preeta on the other side thinks that she would not open the window as he should be the one to ask her. Karan gets worried when she turns back and then thinking of how cold it is he finally gets up and leans against the window, Preeta also opens the window and they both had a romantic eye contect in the room.

Mahira was walking in the hall crying thinking that what has happened with her should not have happened, she thinks of scolding Sameer for what he has done, however when she opens the door he was sleeping and so she thinks that he is saved otherwise she would not have spared him for what he has done. Mahira decides to go and check what is happening between Karan and Preeta.

Karan stops Preeta saying that he does not need her to pull him as he can take care of himself, Preeta responds that she knows he is able to take care of himself but she got worried as there is a thunderstorm and it might get really bad, She decides to go and close the windows however she was not able to because of the wind, Karan also comes closer to her and they both share a romantic moment in the rain as Karan helps her in closing the window, she tries to leave however her dupatta gets stuck, he pulls her closer before putting it back on her. Karan asks for how much things would she depend on him as he was the one to close the windows, they both start arguing over who was the one to close the window, Preeta leaves saying that she does not want to talk about it.

Mahira was trying to open the window but was not able to see so then tries to listen. Preeta asks Karan to take off his shirt, hearing which he starts teasing her that she wants to see him without his shirt and cannot resist the temptation, however she refuses saying that she only wants to help him as he is all wet because of the rain, Mahira believes that they are getting closer and celebrating their Suhagraat which she cannot bear so turns back.

Preeta says to Karan that he has understood what she meant, he sneezes after which he asks her to look away before he changes his cloths, she explains that he will even say that she was trying to look which she was not so he should go to the bathroom. Karan refuses saying hat it is his room and he will change in the room so she is forced to go away however she cannot resist seeing him, when she realizes that he knows she covers her face, he goes near her then places her hands on his body before pulling her closer. He pushes her away saying that is she happy to see him, Preeta runs away.

Mahira was crying while walking in the hall saying that the rain is a blessing, but it is not for her as she only wants that the night be over as soon as possible.

Preeta says that the bed is not comfortable however Karan says that his bed is the best and she would never gotten a chance to sleep on a bed like this, then she leaves to sleep on the couch, he says that he has finally gotten back his bed so would sleep now. Preeta was on the couch thinking that this would be the first night when Srishti was not with her when it is raining so she does not have that feeling and does not want to see the rain.

Preeta sees Karan with a pillow on his face so decides to lift however when she touches him he was not well and was shivering, she wakes him up and after giving the medicine goes to bring water and covers his head with wet towels, Karan thanks her for what she is doing, Preeta remembers how he came closer to her when they were closing the window. 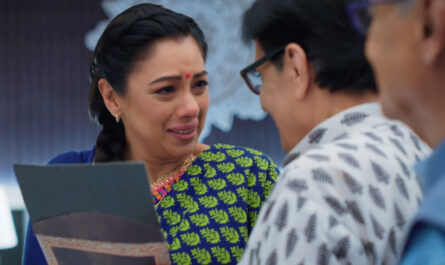 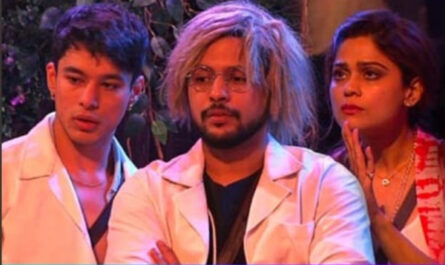