Anupama says sorry to Anuj and he asks her are you alright. She responds I am used to hear taunts like this. Anuj says I did not got drunk intentionally and she says I understand you well. He says if I did any misbehaviour in drunk state then I am sorry. She says no you haven’t done anything wrong. Anuj says I will get ready and then we will leave. 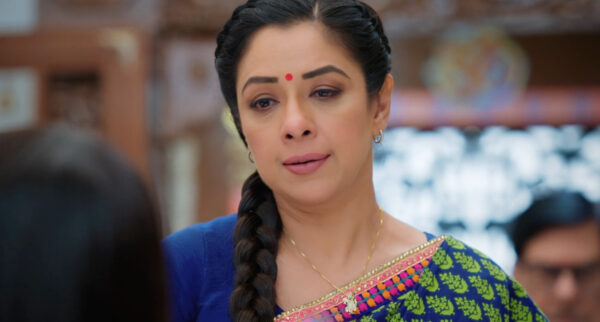 At Shah house, Rakhi orders Baa to make black coffee till the time she waits for Anupama. Baa dares her not to sit on her swing but Rakhi sits then Baa dares her not to swing on her swing but Rakhi started swinging. Baa tells her to step down or it won’t be good for her. Rakhi says she is loving it seeing her angry. Baa makes a phone call to Anupama but she was not picking.

Anupama went inn her and room she gets shocked seeing so many missed calls of Baa on her phone. Vanraj tells her that Rakhi Dave has arrived and she is asking for her money today. Anupama says but she says that she will wait for the deal to get done. Vanraj says she doesn’t have any principles. Vanraj says Kavya went to find another job because she won’t work with Anuj anymore. He tells her to book her tickets.

Kinjal requests Rakhi to leave and reminds her about the deal. Rakhi says, “Deal toh Hai Deal, Deal ka aitbaar kya kije.” She laughs! Rakhi says she needs money now and Anupama did not have signed a contract. Kinjal says will you break your daughter’s house. Rakhi mocks her saying you are only Shah’s daughter-in-law, You are only CCC, “Chatur Chant Chalak.”

Rakhi shows them the permanent name plate she brought to put outside the Shah house with her name on it. Rakhi started playing with the Baa’s mala and throws it down. Baa, Bapuji and whole Shah family started collection beads. Anupama and Vanraj came and they picked Baa and Bapuji up.

Vanraj confronts Rakhi and he tells her that today a so will talk to her. Vanraj says that this swing belongs to my mother and now I have to clean it with Gangajal. Rakhi says wow melodrama to another level. She asked Vanraj for money and Vanraj responds deal is not done yet. Rakhi says today I will leave after putting my nameplate outside your house. Vanraj shouts Rakhi Dave. Rakhi says if you have so much problem calling me Samdhan then you should call me Makaan Malkin because from today I am the owner of this house.

Anupama gives the cheque of Rs 20 lakh to Rakhi and tells her to take it and leave. She also tells her to throw the new nameplate in a dustbin outside. Vanraj thinks if Anupama had the cheque then why did she told him, obviously she wanted to become the heroine. Rakhi says there is Anuj Kapadia’s sign on the cheque. Anupama asks do you care about sign or money. Rakhi says obviously money. Anupama tells her to get up from her Baa’s swing.

Rakhi tells Anupama that looking at your attitude it seems I made a mistake by helping you. Anupama says you did not helped me but you made a deal and if I ever needed the help again then I will sell my kidney but will not come at your door. Rakhi says don’t worry Anuj Kapadia will not let you sell your kidney and he did not even let you sell your rubber band in hair. Vanraj shouts Rakhi Dave, how dare you touch Anupama.

Anupama says leave it Mr. Shah because some people doesn’t even deserve anger. She says if a women’s hair gets untied then she becomes Chandi and asks her do you want to see my Chandi roop. Rakhi gave her rubber band back. Anupama says I left you today because of our relation but not next time. She tells Rakhi Dave to get out. Vanraj throws her nameplate.

Anupama tells Rakhi that from today onwards my daughter-in-law won’t come to your house and neither you will not come at my house to meet your daughter. Baa says absolutely right. Vanraj says you said absolutely right Anupama then she tells Rakhi to come I will drop you outside. Rakhi fell down because her feet got stuck with nameplate.

Anupama tells Samar to bring Gangajal. She cleaned the swing with Gangajal. Rakhi goes out. Vanraj says hope to never see you again. Rakhi says Anuj’s heart won Anupama and his money won you Vanraj Shah. Vanraj closed the door on her face. Rakhi says Anupama till now Rakhi Dave had fun but now she will take revenge, I will come back and very soon Anupama. 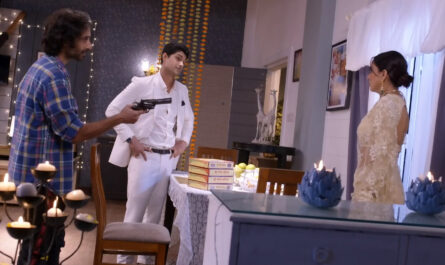 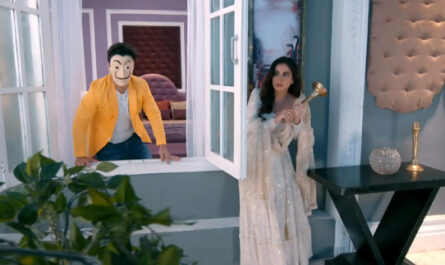 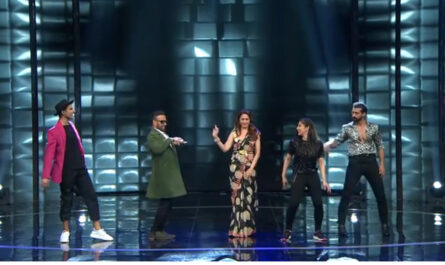