Keith Lee vacates the NXT North American Championship on todays episode of NXT also Mercedes Martinez joins the Robert Stone Brand. Dexter Lumis faces Killian Dain in a singles contest while a triple threat match happened between Johnny Gargano, Bronson Reed and Roderick Strong with a spot at NXT Takeover Ladder match on the line. Karrion Cross gets his hands on Dominik Dijakovic in the main event also Keith Lee had a in ring face to face confrontation with the new monster of NXT. 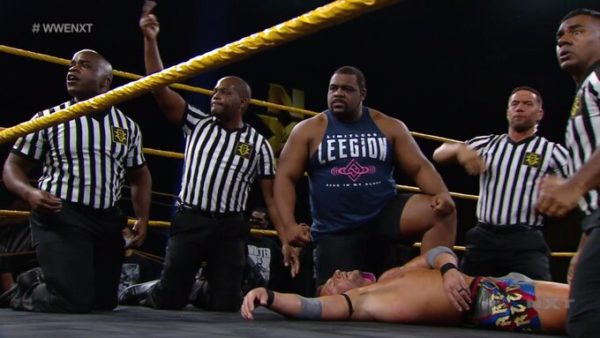 Killian Dain hits a senton in the corner to Dexter Lumis followed by a Powerbomb by Dain. Lumis kicks out. Lumis lands the uranage but Dain fights out of Lumis’ patented head and arm choke. Dain almost lands another powerbomb but Lumis rolls off of his shoulders. Lumis hits a senton followed by the uranage into the head and arm choke. Dain passes out.

Ever-Rise takes an early advantage but Tyler Breeze manages to tag in Fandango, who clears the ring. Fandango and Breezango land a pair of double superkicks for the win.

Aliyah rolls up Shotzi Blackheart with her feet on the ropes. The referee breaks the count. Dragon suplex by Blackheart. Stone gets on the apron. Blackheart kicks Stone in the face. Blackheart hits a senton off the top for the win. After the match, Blackheart runs over Stone’s other leg. Mercedes Martinez runs down the ramp and boots Blackheart in the face.

Johnny Gargano lawn darts Roderick Strong into the middle turnbuckle. Strong responds with the power breaker. Gargano in turn hits his slingshot DDT. Before Gargano can pin Strong, Bronnson Reed dives off the top and crushes Strong with a splash for the win. With this victory Reed advances to the Takeover ladder match.

Timothy Thatcher fish hooks Oney Lorcan to get him to break the hold. Half nelson suplex by Lorcan. Thatcher kicks out. Lorcan locks in another wrist lock. Thatcher counters it into a pin for the win.

Keith Lee stomps down to ringside. The referee asks Dominik Dijakovic if he wants to stop the match. Dijakovic and Lee lock eyes. Dijakovic says it’s on him. It’s his call. Dijakovic refuses to quit. Karrion Kross holds Dijakovic head up and asks Lee if he’s watching. Kross puts Dijakovic in the Kross Jacket. Dijakovic passes out. The referee calls for the bell. Lee gets in the ring to check on Dijakovic. Lee and Kross stare daggers at each other.

1. William Regal makes a announcement that current double champ Keith Lee asked for time to speak to the NXT Universe. Lee announces that in an effort to not limit anyone else’s ability to advance he will be relinquishing the North American Championship. The only condition he has in doing so is that as many people as possible get a chance to win the title. Regal notes that there will be a series of triple threat matches to determine who will go on to compete in a ladder match to crown a new North American Champion at Takeover.

2. Backstage, Roderick Strong says he never got a rematch for the North American Championships so he should have just been given the title. Bronson Reed walks in and says this is his chance and he’s going to take it. Johnny Gargano walks in and makes fun of everyone.

3. Backstage, Dominik Dijakovic says he’s been trying to figure out what’s next for him. What’s next is knocking Karrion Kross unconscious.

4. Backstage, Mercedes Martinez tells Robert Stone that she needs someone to handle the business and all the stuff she doesn’t care about. If Stone oversteps she will break both his legs. Stone welcomes her to the Robert Stone Brand.

5. Finn Bálor says he is going to win the North American Championship. 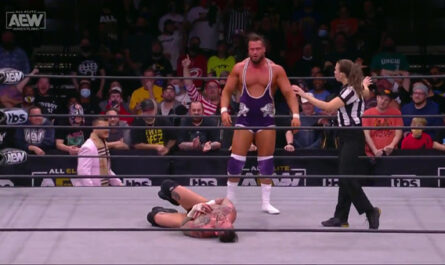 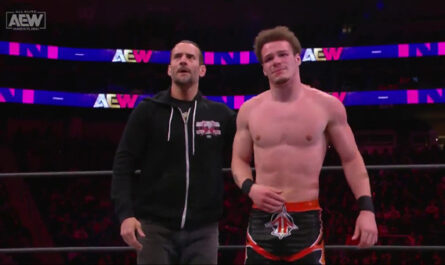