The Horror Show at Extreme Rules has been aired earlier today and we saw the worst cinematic match WWE ever produced, Yes we are talking about Swamp Fight also a new Women’s champion has been crrowned. The tag titles also changed hands and Seth Rollins puked during his Eye for an Eye match against Rey Mysterio.

Buddy Murphy lands several kicks. Murphy struggles to lands a superplex. Kevin Owens reverses it into a top rope gourd buster. Owens bounces off the second rope, spins in mid-air, lands on the top rope, and hits a picture-perfect moonsault. Superkick by Owens. Murphy doesn’t go down, but he stumbles into a Stunner by Owens. Owens pins Murphy.

Shinsuke Nakamura saves Cesaro from being put through the stacked tables. Cesaro swings Big E. Nakamura catches Big E. with a basement dropkick. Cesaro powerbombs Kofi Kingston off the top to the outside area through two tables for the win

Bayley looks to be out. Nikki Cross pulls Bayley to the apron and hits her finish off the apron to the floor. Cross brings Bayley back in. Bayley kicks out. Sasha Banks and Alexa Bliss both get on the apron. As the referee is distracted, Banks hands Bayley her four finger diamond incrested “BOSS” ring. Bayley decks Cross with it. Bayley hits her facebuster finish for the win.

4. Seth Rollins vs. Rey Mysterio Eye For an Eye Match

Bayley hits the Bayley-to-Belly on Kairi Sane on the tag title belt. Sasha Banks and Asuka trade pin attempts. Banks tries to hit Asuka with the tag belt but the referee pulls it away. Asuka tries to mist Banks but Banks ducks. Asuka mists the referee instead. Asuka puts Banks in the Asuka Lock. Banks taps but there is no referee. As the referee flails in pain, Bayley hits Asuka with the tag belt. Bayley rips the shirt off the referee and puts it on. Bayley counts Banks pin on Asuka and demands they ring the bell. Bayley gives Banks the title belt as if she has actually won the match.

Drew McIntyre headbutts Dolph Ziggler. Ziggler hits another Zig Zag and a Rock Bottom on a chair! McIntyre still kicks out. Ziggler hilariously yells “why won’t you die!” Ziggler calls for the Superkick. McIntyre kips up and hits a surprise Claymore for the win!

Bray Wyatt says look what you made me do. Braun Strowman stumbles to his feet. Wyatt laughs before taking a swing at Strowman. Strowman “This is Sparta” kicks Wyatt into the swamp. Wyatt doesn’t resurface. Strowman says it’s over and the ending logo for the show appears at the bottom of the screen. A hand pulls shoots out of the water and puts Strowman in the mandible claw. Wyatt’s hand pulls Strowman into the swamp. The swamp starts to boil. The Fiends pops out of the water. 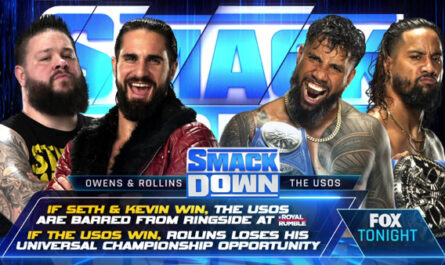