Pratha took her Sheesh Naagin form and she saved Mahek. After that she gave a lecture to Lalit Gujral for trying to sell his own motherland. Pratha says that she will kill him today. Lalit tells snake charmer’s to save him and they started playing the been but Pratha pushed them all away. Lalit begged for mercy and Pratha told him that now your time has come. 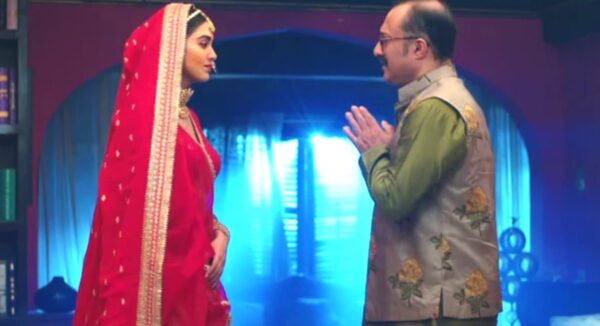 Rishabh saw some footprints in the jungle and he started following them thinking that those were his father’s footprints. He tried to call Lalit but he was out of reach. Pratha grabbed Lalit by her tail and she told him that nobody will save him today and his existence will be erased and she will do it.

Seema shouts at Radha for wasting time and then she started shouting at the staff for wasting the time as mahurat is near for marriage. Pandit Ji told her that only 30 minutes left in the mahurat. Anya came to Seema and she started talking regarding the business but Seema shouted at her saying you are the daughter of this house and my sons will take care of the business. Anya left sad and Seema says sorry to Anya alone as she wants her to stay away from the business because there is a lot of danger in it. Seema then says where is Rishabh.

Rishabh was trying to find Lalit and suddenly a hand came out from the ground but he did not saw it. Rishabh leaves saying that Mayank might have lied to him. Pratha and Mehak came out of the ground and then Pratha gave Lalit a lot of pain.

Pratha went to see Mahek but she was not getting up. In order to save her elder sister Pratha started chanting the Mahamrityunjay mantra and finally Mahek woke up. Mahek asked Pratha that you are sheesh naagin so why did you spent all your powers to save me and Pratha said that you are my elder sister. She said that its a mystery and nobody should find out that how and why I became a Sheesh Naagin. Its turns out that Pratha is the real sheesh naagin and both Mahek and Pratha were fooling professor all along. Mahek told Pratha that Lilit is still alive but Pratha told her that we need to go back as mahurat of marriage is near. So they both left leaving Lalit there in pain.

Rishabh came back home and he inquires about Lalit from Seema but she did not told him anything and told Rihaan to get his brother ready for the wedding. Seema thinks that if Rishabh finds out that his father is a traitor then an Army office will stand in front of Lalit. Anya told Rishabh that Pratha bhabhi is not opening the door and then Rishabh started knocking the door.

Mahek tells Pratha that we need to get back home fast because this marriage is very important for you to find out the rest of the Asur’s. She further tells her that you are getting weak because you spent all your powers to save me and now this red moon light will hurt you. Rishabh breaks the door of Pratha’s room. Radha saw Pratha from behind in naagin form and she got scared. Pratha says we will go back and Mahek asks how as your true identity will come out but Pratha says that I won’t allow anyone to take off the veil.

Seems tries to take off Pratha’s veil to put a traditional family necklace around her neck but in time Pratha’s father stopped her and told her that there is a family ritual as per which nobody can see bride’s face before marriage. Seema left and it turns out that Pratha’s father is also a naag and he was helping her in accomplishing her mission.

Rishabh told Ritesh to think again about marrying Pratha as that girl is weird but Ritesh says that I will marry her no matter what. Rishabh thinks that Pratha is a danger for this country. Pratha told Mahek that she will do everything to save her country and for that she will even marry a stranger.

Rishabh’s brothers tried to flirt with Mahek but she told them to stay in their limits otherwise she will teach them a lesson. They said that she has a lot of attitude.

Pratha came downstairs and her heels got off but Rishabh helped her thinking that was Reem. Urvashi came with Reem and told her that it was the wrong girl. Rishabh then went with Reem and Ritesh went with Pratha.

Dadi asked where is Lalit and then Mahek talked to her on phone in Lalit’s voice and tells her that he got stuck in some work. Urvashi wonders why is Pratha hiding her face and Pratha prays that nobody should see her face. Pratha’s veil was about to get taken off. 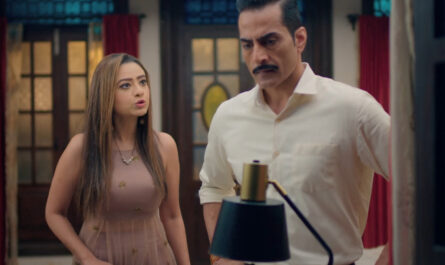