Preeta says that this girl is trying to become my souten then Ramona says that not her but you are trying to become souten. Preeta tells Ramona to keep quiet and she tells Mahira that I have never seen a girl like you. Karan says one minute and he tells Preeta to talk to Mahira with respect. Gaytri says oh my God, you are defending the other woman as you should support your wife. Rishabh says yes he should. All the Luthras got shocked hearing this and Ramona says Rishabh in shock. Gaytri says that in this house Rishabh is the only honest person as in every house there is one honest person and in this house Rishabh in the one. Gaytri asked Rishabh to tell whether they both got married or not. Rishabh says yes Preeta and Karan got married. Everyone started staring at Rishabh and he says that why are you all staring at me as they asked me to tell the truth so I am telling the truth. 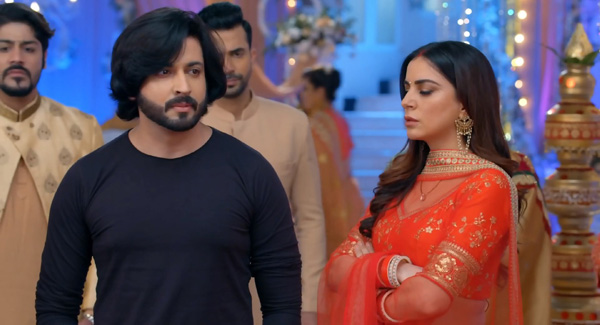 Sherlyn says that her husband is a very good friend of this girl and thats why having pity on her he is saying all this as his friendship is more important then his brother. Karan says one minute Sherlyn as Rishabh loves me the most so don’t lie ok. Ramona says Karan here we are not talking about relations but the situation. Karan says you also understand one thing I hate lies a lot. Preeta says that if you hate lying that much then say the truth didn’t you married me that day behind sehra or that sehra was a lie, that marriage was a lie or that night was a lie, you tell as you hate lying that much then you say the truth Karan Luthra.

Promila asks Rakhi as mother-in-law is like mother so why didn’t you stopped your son, Gaytri asked Rishabh that you are Preeta’s Jeth like his friend then why didn’t you said anything to Karan. Gaytri tells Kritika as you are the daughter of this house and a girl then why didn’t you take action as you understand what happenes to a girl when she was left after marriage. Karan says stop and now no one from you question me as how I behave with Preeta and what I do with her, I don’t need to give you people any explanation. Karan tells Preeta that I was your friend in the past so thats why I am telling you with all due respect to leave otherwise something bad will happen which I don’t know so thats why I am telling you to go to your house, just leave.

Preeta says where should I leave as I am standing in my house and I will never leave from here. Karan calls the police inspector and tells her to come here. Gaytri says you did good as you called the police as you made our job easy and helped us as we need police but don’t think that you have called the police so we got scared. Karan tells Preeta that you will regret about coming here and he tells NGO workers that when you will get to know the truth then you people will apologize to me just wait and watch.

Rakhi leaves the hall and she was walking in the corridor thinking that what Preeta has done is not right as she has destroyed the reputation of the family which she cannot bear, Ramona also says that she should not have done this however has done it as she wants to become a member of the society, Kareena stops her saying that it is not the fault of Rakhi as Preeta always acted as innocent in front of her, she even tried to call her Rakhi maa so as to gain her sympathy which would allow her to stay in their house, Rakhi says that she will never forgive Preeta as what she has done has hurt her to the extent that it will never matter what Preeta does she will never accept her. Kareena says that if Preeta had married Prithvi their lives would have been a lot different and easier.

Sarla tells Prithvi that it was really good that Preeta was not married to him, they respected him because she thought that Preeta would not be able to marry someone more honest than him as he was nice with the entire family including Preeta but she was wrong as he hid who he really is, she explains that Karan is much better then him as he has only a single intention but Prithvi is is a disgusting person, she says that Prithvi mentioned that Preeta was left twice and he will marry her but this is what he desired so he said those things, she is not worried about what the society thinks and she prays that no family ever get a son in law like him, Sarla orders Srishti to throw Prithvi out of her house.

Srishti tries to throw Prithvi out however he comes back kicking the door saying that they have open the gates of hell after rejecting him and it would have consequences that they could not comprehend as he hates them all and will surely take revenge from them. He pushes them all and goes into the room of Preeta, Janki hits him from behind with a vase on his leg, Prithvi comes to hurt her but falls when Srishti hits him with her feet, Sarla says that they are not lying as Preeta is not in their house as she is in the Luthra house, he after realizing that they are telling the truth was thrown out when Sarla says that she will otherwise call the police. Prthvi says outside the Arora house door that if Preeta had not married Karan then they all would have respected him however it is not a matter of concern as he knows how to make everyone kneel before him and will make sure that it happens. Srishti inquires if Janki is alright than also goes to Sarla asking if her hand is alright.

Sherlyn asks if they all think that Preeta is right but Karan responds that those who say that she is right has lost his or her mind, Kritika says that she knew what Preeta was trying to do when she saw her with the people of NGO. Baani Dadi says that she is someone who only desires money as why did she not say anything when Kareena was trying to throw her out of the house, she said that she would listen to what Rakhi maa says yet still she is trying to enter their house, Karan leaves. Rishabh tries to go after him but Sherlyn asks him where he is going then he says that she must not ask him as he will get rude with her.

Sherlyn sees Prithvi outside the house and leaves the hall to go after him, Mahira turns to Baani Dadi saying that both Karan and Rishabh are the member of her family so nothing will happen to them but what will become of her. Baani Dadi assures her that nothing wrong will happen as no one will accept Preeta because she is still in the house while Preeta is outside.

Rishabh went to Karan saying that he must stop this as if the police arrive they would take the side of Preeta, Karan says that there is a new Inspector in the area and she is his fan so there is no need to worry. Sameer asks Rishabh if this means that Preeta would not get justice. Rishabh says that she would surely get justice however he is trying to convince each and everyone. Gaytri assures Preeta that the police will take their side, they hint to another case where the girl was wrong as she only desired wealth, but this is not the case with Preeta and they would surely win the case. 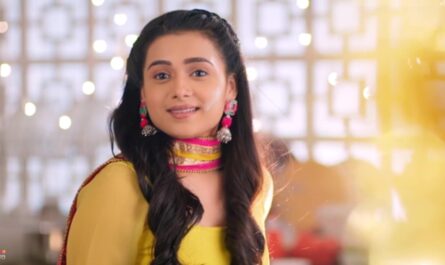