Ricochet became the new IC Championship on todays episode of Smackdown as Sami Zayn got distracted during the match due to an interference by Johnny Knoxville. After losing the championship, Zayn got crazy backstage and he said that he will see Knoxville at Dallas in WrestleMania 38. 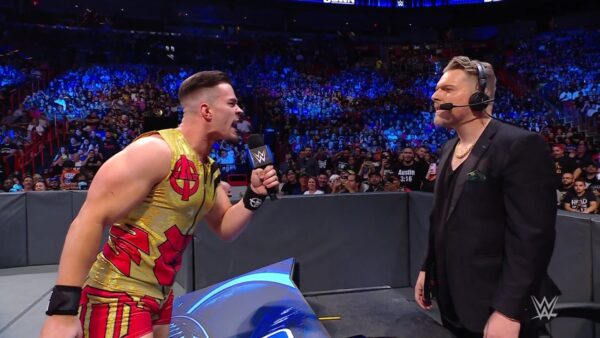 Austin Theory came to the ring and he says that he’s Mr. McMahon’s protégé. Wherever Mr. McMahon goes, Theory goes. Theory tells Pat McAfee that Mr. McMahon set him up and he actually hates him. Mr. McMahon’s protégé says he’s McAfee’s opponent at WrestleMania 38. Theory slaps McAfee and walks away. McAfee blames Michael Cole for what just happened. McAfee says he has no idea who that was.

Shinsuke Nakamura and Rick Boogs were making their entrance for their match but during their entrance the Usos attacked them from behind. After super kicking Boogs, Jimmy and Jey throw up the ones. Roman Reigns music hits. Reigns and Heyman walk out and make their way to the ring.

Roman Reigns says he called his shot last year when he said he was going to stack ’em up and pin ’em. Reigns promises to smash Brock Lesnar, pin him, stand over him, and while about 5 million dollars worth of fireworks goes off he’s going to hold up both titles. Then Lesnar will acknowledge him.

After Ronda Rousey defeated Sonya Deville, Charlotte Flair and Rousey stared at each other after the match. Flair gets in the ring and takes a swing at Rousey. Rousey puts Flair in the ankle lock. Rousey eventually let’s go. Flair limps away.