Srishti locks the terrace and says now its locked so the kidnapper has nowhere to go. Sameer tells her to stay behind him and don’t makes noise. Sameer starts moving saying if you stay behind me then you will stay safe but Srishti stays there and doesn’t say anything. Sameer went back to her and asks her why she is here. Srishti says that do you think I can’t handle the kidnapper. Sameer says I am with you so why are taking risk then Srishti says oh so you want to be my hero then say its as it is as you care for me na. Sameer says ok I care for you so now follow me and keep quiet. Sherlyn opens the door, Rishabh asks her why it took such a long time but she does not answer, then Prithvi runs when they all enter the room, Preeta wonders where he ran away because she was at the window, the police leaves the room and Rishabh also advises that Sherlyn remain conscious as the kidnapper is still in the house, Preeta wonders how clever Sherlyn is because she helped the kidnapper escaping so thinks that she must inform Karan about what she heard as when he marries Mahira she would not be allowed to come to their house.

Prithvi bumps into Sameer and Srishti, Rishab also comes and they all surround him but he takes Srishti threatening to harm her with the knife, Rishabh recognizes that it is the same knife which Sherlyn had when she was cutting the fruits, he wonders how the kidnapper got it, he tries to make the kidnapper leave Srishti but he does so and immediately jumps from the window. They all were frustrated that he ran away, the police inspector mentions that he ran away because they came in their way and that is why the kidnapper ran away, he gets a phone call from his informant who mentions that the kidnapper has run away. Rishabh asks both Sameer and Srishti if they saw the face then leaves mentioning that he has something which he needs to take care off.

Rakhi and everyone was waiting about what would happen, Dadi mentions that she thinks it is because of Preeta as she feels that she is the one behind everything, Rakhi gets frustrated mentioning that she knows that Preeta is off a good heart and so could not have the heart to do anything of the sort, she tries to explain how good Preeta is and that she could not have the strength to do anything, Kareena however says that has she forgotten when Preeta was the one to demand Alimony from them, and it included shares in even their business, then how can Rakhi say that she is a pure soul, Rakhi tries to defend her by mentioning that she knows Preeta is not perfect but believes that she cannot have the courage to do something like this, she might have done it because of the anger that was filled in her, Rakhi also asks how Dadi changed her views because she always believed that Preeta was a part of their family then Kareena gets angry and asks Rakhi to stop talking.

Rishabh comes, they all ask him where Karan is and what happened to the kidnapper, he says that the kidnapper ran away, Srishti and Sameer were about to come to them when Sameer stops her mentioning that she should not go to them because Kareen does not like her, this would create a scene and it is not worthwhile. She agrees that their plan to stop the wedding must happen and they will only focus on it. Sanjana goes to Rishabh mentioning that he is her son in law so she cares a lot for him but she feels that his kidnapper was orchasted by no other than Preeta, Rishabh does not hear a word against her mentioning that he knows she cannot do anything like this, he asks Rakhi about Karan then leaves.

Karan comes out from the bathroom when Preeta comes demanding that he listen to her as she wants to talk about his family, she explains that both Mahira and Sherlyn are working together and they are planning to inject Mahesh with something that he would not come out of the coma, He gets angry saying that she should talk only with him as he knows that she does not care for his family, she mentions that Sherlyn was the one to help the kidnapper hide in their own house because when they were searching for the kidnapper he was in the wardrobe of Rishabh Luthra, she explains that he must believe her because she has told him the entire truth, he starts laughing mentioning that she is the one behind everything and is now blaming Sherlyn, she is thrown out, Preeta wakes up and realizes that it is a dream, she realizes that no one including Rishabh would be able to do anything and she knows that Mahesh is an honest person so how can she let him die, she was crying when Karan in the room gets a phone call and leaves the room.

Preeta thinks that he is right and Rishabh is in danger because Sherlyn can do anything but how can she let anyone do such a thing, she knows that Mahira and Sherlyn are planning each and everything together so how can she stop them because Karan would never believe her. She realizes that the only way it would happen is when Mahesh wakes up and that when he would be the one say to karan that Mahira is not the right girl and also Sherlyn is the one behind his accident so if he says to him the truth then karan would believe him. She wonders how he can say anything as he is in coma, she realizes that she would make sure that Sherlyn and Mahira do not get successful in their plan and she would be the one to ruin them all. 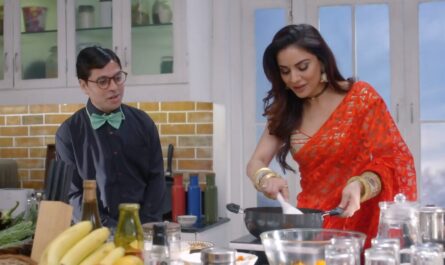